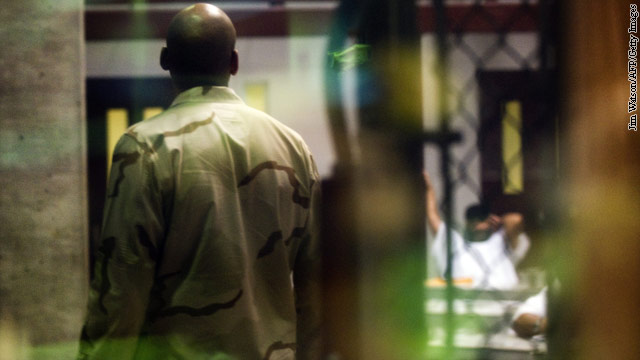 A US military guard stands watch with detainees in Cell Block A of the "Camp Six" detention facility of the Joint Detention Group at the US Naval Station in Guantanamo Bay, Cuba
March 6th, 2012
03:00 AM ET

Report: More former GITMO detainees back on the battlefield

The number of former Guantanamo Bay detainees who have re-engaged in terrorist activities since their release has increased slightly according to a new report made public Monday by the director of national intelligence.

The congressionally-mandated summary shows that 167 out of 599 detainees who were transferred to other countries as of December 2011 are either confirmed or suspected of returning to the battlefield, fighting Western interests. That represents nearly 28% of those released.

But the report also indicates 14 of those people are dead and 54 are in custody. Most of the releases occurred during the Bush administration, and the increased recidivism rate applied mostly to those released detainees.

A similar study released in late 2010 indicated 150 of the former Guantanamo Bay inmates - 25% of the total - were either confirmed or suspected of engaging in terrorism after their release.

A Pentagon spokesman took exception to characterizing the current recidivism rate at 28%. Lt. Col. Todd Breasseale said the intelligence bar for someone confirmed of returning to terrorism is much higher. "Someone on the "suspected" list could very possibly not be engaged in activities that are counter to our national security interests," Breasseale said.

There are currently 171 individuals still in custody at Guantanamo Bay. Approximately 60 detainees have been cleared for transfer to another country if the proper security arrangements can be made. And 30 Yemeni nationals are in conditional detention because of the current security situation in Yemen.

At a congressional hearing last year, Undersecretary of Defense for Intelligence Michael Vickers said, much like the criminal justice system, there are inherently some repeat offenders among those detainees transferred to other countries.

He added the United States is dependent on those nations to carry through on their obligations. "But countries are sovereign, and we do our best to ensure that these conditions are met," Vickers said. "They are not always met 100% in some of these areas, so that is part of the challenge."

In the new report, Director of National Intelligence James Clapper acknowledged the possibility of problems with future transfers. "We assess that if additional detainees are transferred without conditions from (Guantanamo Bay), some will reengage in terrorist or insurgent activities. Posing a particular problem are transfers to countries with ongoing conflicts and internal instability as well as active recruitment by insurgent and terrorist organizations."

That fear of detainees returning to the battlefield prompted Congress last year to place restrictions on the Obama administration's ability to transfer individuals from Guantanamo Bay.

Some members of Congress are particularly concerned about the possibility that the the administration is considering a proposal to transfer five Afghan detainees from Guantanamo Bay in an effort to open up discussions with the Taliban to bring about an end to the war in Afghanistan.

At a Senate Intelligence Committee world threats hearing last month, Sen. Saxby Chambliss, R-Georgia, worried that the detainees were too dangerous to be released from U.S. custody.

Clapper told Chambliss any proposed transfer had not been decided and would be part of ongoing consultations with Congress.

Leave a Reply to Kayaking forum