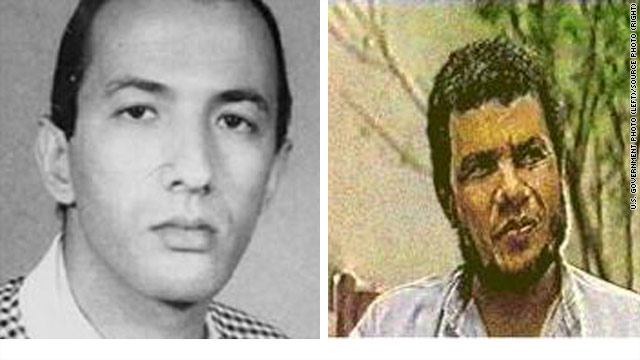 What's in a name? If you are Mohamed Ibrahim Makkawi, years of trouble and the shadow of a senior al Qaeda figure lurking over your every move.

Makkawi's arrival at Cairo's airport Wednesday caused a brief flutter of excitement.  Could it be that one of the most senior figures in al Qaeda had been detained in dramatic (and highly unlikely) fashion after stepping off an Emirates flight from Islamabad in Pakistan? The confusion arose because Saif al-Adel - regarded as al Qaeda's third-most-senior figure - had long been associated with an alias identical to Makkawi's name.

The two men do have some common background. Both were Egyptian military officers who joined the Egyptian Islamic Jihad. Makkawi was a major and an explosives expert in Egypt's Special Forces. He went on trial in 1987 for his Islamist connections and was dismissed from the army.  Both he and al-Adel - then a lieutenant and apparently a more active militant - left for Pakistan and joined Osama bin Laden's jihad. By 1988, Makkawi was fighting Soviet forces and their surrogates in Afghanistan.

"I last saw Makkawi in 1989 when we fought together," Mohamed Omar Abdel Rahman, another former jihadist from Egypt, told CNN Wednesday.  "I also knew al-Adel well and fought alongside with him during our jihad," added Abdel Rahman, who is also the son of the blind sheikh now serving a jail term in the United States for his involvement in the 1993 attempt to blow up the World Trade Center.

According to a source who followed al Qaeda at the time, Makkawi fell out with bin Laden and Ayman al Zawahiri, al Qaeda's current leader, soon after arriving in Pakistan.  By about 1990, the source says, Makkawi had given up the gun in favor of contributing to a magazine in Islamabad - Akdas Wakadaya or "Events and Issues."

Nearly a decade later, al-Adel became a wanted man for his part in the plots to blow up the U.S. embassies in Kenya and Tanzania. U.S. authorities published his profile as part of the Rewards for Justice program and listed "Muhamad Ibrahim Makkawi" as an alias.  And the real Makkawi's nightmare began. By then, he had married a Pakistani woman and was living as a political refugee in Islamabad.

For 10 years, Makkawi was regularly confused with al Qaeda's rising star. He adopted the e-mail address "Unjustly_Guilty@.....," and from his home in Islamabad's Upper Portion began a campaign to clear his name.

CNN has obtained a copy of a letter Makkawi wrote to the U.N. High Commissioner for Refugees in 2009 that recounts his appeals to authorities in several countries.

"I am trying to resettle my normal life in Pakistan after getting married to a Pakistani lady but have accomplished nothing as a result of the Egyptian and Saudi regime's pressure on Pakistani agencies and my moral obduracy," he began.

Makkawi said his children had been expelled from school and friends, neighbors and relatives had become informants for intelligence agencies.

"After the agencies lost hope to force me to accept fake al Qaeda No. 3 role and the big 9/11 lie, they attempted to kill me and my two elder sons by despicable means," Makkawi claims, adding that at one point there had been an attempt to poison him.

In desperation, he told the UNHCR, he appealed to President George W. Bush and also asked the FBI to detain him.

"Hoping to put an end to this preposterous puppet show and to put myself under the responsibility of FBI, I sent an e-mail on 7th September 2005 to the head office of FBI requesting to be arrested and to face all accusations raised against me in a fair trial," he wrote. He did not receive a reply.

Somehow, after being denied travel papers for more than 10 years, Makkawi was apparently able to obtain travel documents from the Egyptian Embassy in Islamabad. And then he boarded a plane to Cairo Wednesday, in an effort to clear his name and expunge the shadow of Saif al-Adel.

The confusion over his real identity persisted for some hours after his arrival. Eventually, the Egyptian Ministry of Interior confirmed that al-Adel was still at large.

"Mohamed Ibrahim Makkawi is not Saif al-Adel," the ministry said. "There is obvious confusion of data among security apparatus and the media. They are two different people. "

But the real Makkawi's troubles are far from over. The Interior Ministry confirmed to CNN that Makkawi was still a wanted man and faced charges of terrorism and conspiracy to topple the regime. He will remain in detention and appear before the Higher State Security Court, the ministry said.