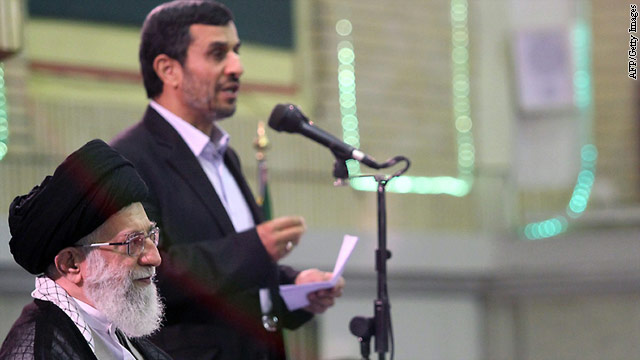 "When it comes to Iran, you always have to differentiate between what is bluster and what is real," Afshin Molavi, an Iran analyst with the New America Foundation, told CNN. The threats to close and mine the Strait of Hormuz, through which a high percentage of the world's oil supply passes through, were all bluster, Molavi said.

Iran has a lot to lose by closing the Strait. With 80% of their hard currency earnings, and most of their revenues coming from the oil trade, Iran would face severe economic repercussions through such an act.

Iranian external foreign policy is driven by the supreme leader, Ayatollah Ali Khamenei. The remark about closing the Strait was made by an Iranian vice president, of which Iran has many, to a local audience that was then picked up by news organizations around the world following a report by an Iranian news agency.

Molavi said the remark was likely made to pander to the vice president's immediate audience in Iran, "not realizing this is going to go viral and global very fast."

The assassination attempts of Israeli diplomats however adds a wrinkle to an otherwise long running story.

"Iran and Israel have been involved in a low-grade intelligence war for roughly two decades," Molavi said. "That has now bled into taking human lives."

The deaths of five Iranian nuclear scientists and the destruction last year of an Iranian missile facility are widely believed to have been the work of Israeli intelligence. The recent attacks directed at Israeli diplomats, the wife of an Israeli diplomat in India was seriously injured in one of them, are believed to be a response to the assassinations of Iranian scientists. Both governments have denied their involvement, but have been quick to point their finger at each other.

In the past, international attacks attributed to Iran have mostly been carried out by operatives of its proxies like Hezbollah. With Iranian nationals having been arrested at the scene of some of these recent attacks, a new dimension in the low grade intelligence war may be beginning.

"This is new if it proves to be true," that Iranian nationals are conducting attacks overseas Molavi said. "We are entering new territory," he said.

When it comes to Iran's nuclear program, the picture is a bit more nuanced for Iran watchers - and U.S. officials for that matter.

In a recent interview with CNN, Joint Chiefs Chairman Martin Dempsey said he believed the Iranian regime was a "rational actor" when it comes to the nuclear program. Dempsey said Iran would likely weigh the ultimate costs and benefits of building a nuclear weapon before doing so. James Clapper, the Director of National Intelligence, recently told a Senate panel that a decision had not yet been made by the regime in Tehran.

Michael Singh, who focused on Iran while serving on the National Security Council during the Bush administration, says Tehran will always hold firm to some parts of the program even if they never weaponize. "They want us to abandon any thoughts about getting them to stop their [uranium] enrichment program and accept as a baseline what they have already accomplished," Singh told CNN.

Iran has allowed two separate delegations of inspectors from the International Atomic Energy Agency into the country in recent weeks to visit some nuclear sites. Both visits have ended in disappointment when Iranian officials did not allow inspectors to visit sites they felt had a military dimension to them.

But while the full effect of international sanctions aimed at Iran's oil sector and central bank are not expected to hit until June, Iran is beginning to feel some pain, and that pain may be yielding some cracks in the regime's stance.

Iran's access to international banking channels is getting squeezed, and its currency, the rial, has plummeted nearly 50% in value in recent weeks. Industrial investment is declining and factories are shutting down. Molavi, with the New America Foundation says this may help explain the recent letter by Iran's nuclear negotiator to Catherine Ashton, the EU foreign policy, chief seeking a return to talks about its nuclear program.

U.S. officials have cautiously welcomed the letter. "Any conversation anywhere with Iran has to begin with the disposition of their nuclear program, I mean that is the number one issue," Secretary of State Hillary Clinton said in testimony before the Senate Foreign Relations Committee Tuesday. "Iran's response to her letter appears to acknowledge and accept that."

The United States is currently working with the so called P5+1 group to fashion a coordinated response to the letter from Iran.

And with parliamentary elections in Iran set for next week, the regime's bellicosity may be directed inward as much as it is towards the United States and Israel.

"The Iranian government is much more concerned with what's going on in Iran internally, it's very preoccupied with the election," Alireza Nader with RAND told CNN.

The leadership in Iran has been divided since President Mahmoud Ahmadinejad dismissed the country's intelligence minister last year. The minister was reinstated by Khamenei, and the two camps have had icy relations since.

"Khamenei wants to show the Iranian population that he is in command of the country, that he knows how to deal with the United States, and that he is not going to succumb to pressure," Nader said.

Many Iranians do not view the regime as being credible Nader said, "so right now is really the worst time for the regime to face external pressure as well, and it has to show that it is strong in the face of these pressures."