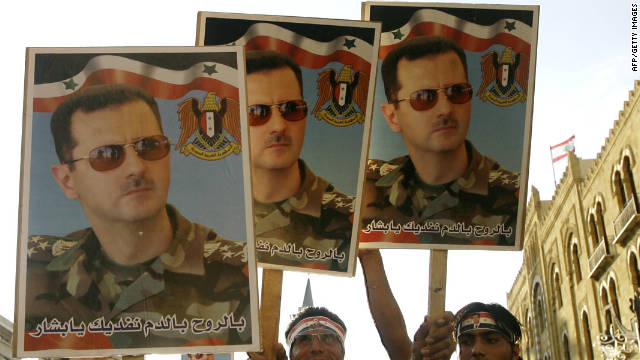 The planning behind the scenes comes as the United States continues to pursue diplomatic and political solutions, including trying to pressure Syria's President Basher al-Assad to step aside.Pentagon officials across the board say the use of U.S. troops remains highly problematic in any scenario as long as the violence continues unchecked. But the phrase 'full range of options' means just that, all scenarios are being thought through.

"There are lots of ideas floating around," the official said. "But all of them require heavy lifting," he said, noting that any use of U.S. troops would be politically and militarily difficult in such a sensitive part of the world. Nonetheless, he said, administration officials and military commanders are still actively considering what to do.

"People are teeing up options," he said. "We want to understand what is the art of the possible." None of the officials would agree to be identified because of the sensitive nature of the discussions under way inside the administration.

If Obama were to order any type of action, then additional planning and deployment orders would be some of the next steps.

The Obama administration is considering whether there is anything the military can or should do to facilitate humanitarian assistance, for example, several officials told CNN.

As CNN has previously reported, the Pentagon also has looked intensively at what it would have to do to protect Syrian chemical weapons sites if they were left unguarded. One scenario calls for tens of thousands of troops to potentially be used for guarding the installations.

One of the major concerns is what would happen if Assad somehow was no longer in office, U.S. officials said.  They believe other leaders close to him in Syrian military and intelligence agencies would remain in place for some time.  But if the entire regime were to collapse, it could force the hand of the United States along with the international community to act to maintain security and protect civilians.

But unless and until a decision is made by Obama to undertake a military option, action at the moment remains limited mostly to using American satellites overhead to gather intelligence about what is happening on the ground, including the movements of Syrian forces.

As CNN previously reported, American officials say they are intercepting communications by regime leaders and the Syrian security apparatus, including the military. So far the decision is to not jam those communications because they provide intelligence about the regime's actions.

Intelligence gathering also provides indications of which specific Syrian units on the ground are attacking civilians. That information could be potential evidence for future prosecution of war crimes. The United Nations already says it believes crimes against humanity have been committed.  On Tuesday, Secretary of State Hillary Clinton said Assad could "fit into that category" of war criminal but cautioned against the United States pursuing that.

"I think people have been putting forth the argument, but I also think from long experience that could complicate a resolution of a difficult complex situation because it limits options to persuade leaders to step down from power," Clinton told a Senate committee on Tuesday.

This element is also part of the U.S. strategy to try to shake the loyalty of Syrian troops and commanders to the regime. But by all accounts there have been few defections so far.

Several officials confirm to CNN that for now, any use of U.S. intelligence gathering drones over Syria has been ruled out because of the threat of Syrian surface to air missiles and the concern over inserting U.S. assets into the war there.

The first indication of the intelligence campaign came with the release of low resolution imagery showing Syrian forces in and around cities where civilians had been attacked. Officials acknowledge there is more high resolution classified imagery showing the situation in great detail.  This capability is allowing the United States to monitor the movement of Syrian forces, assess their command and control units, air defenses, security of their chemical and biological facilities and ability to resupply their troops.

"We can see a crack on your sidewalk," said yet another official of the imagery capabilities.