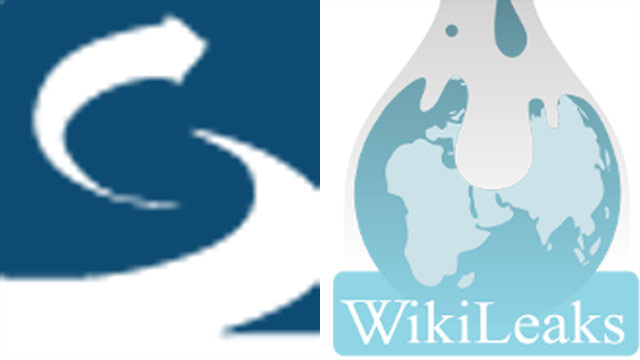 This week, the second blow was delivered as the website WikiLeaks began posting what it says is a body of internal Stratfor e-mails numbering in the millions and reportedly laying out just how the sausage is made at a modern-day private intelligence firm.

A reading of the e-mails already published paints a picture of a company that sees itself, at times, as a rival to U.S. government intelligence agencies.

While companies that offer analysis products to government and corporate clients are common, they rarely ever publicly disclose how they make their assessments, and how they employ their various "sources" of information, nor do they talk about how they turn that information around for their clients.

But within the lines of the more than 5 million e-mails that WikiLeaks claim span a seven-year period of time, a picture begins to emerge.

The e-mails range from detailed lists of clients that include companies, individuals, universities, and government departments, to the company's own analysis of the strength of its source roster. They also lay out the vision that Stratfor CEO George Friedman had for the company, and offer details about a generous donor who played an instrumental role in the development of an investment fund fueled by Stratfor's intelligence-gathering initiatives.

The company says it is outraged over the breach of its privacy and is remaining tight-lipped about the e-mails, though it did issue a statement on how it sees the disclosure of private information. Read full statement here.

"This is a deplorable, unfortunate - and illegal - breach of privacy," read the Stratfor statement, which warned that contents of the e-mails may have been altered.

The company refused, however, to answer any questions about the information contained within them, saying: "Some of the emails may be forged or altered to include inaccuracies; some may be authentic. We will not validate either. Nor will we explain the thinking that went into them. Having had our property stolen, we will not be victimized twice by submitting to questioning about them."

As with prior WikiLeaks mass-information postings, many of the e-mails appear harmless, but some seem to reveal a company that sees itself as a rival to the government's intelligence community. For instance, one e-mail dated 2004 that was purported to be from Friedman, shared news that the head of analysis at the Central Intelligence Agency had been fired. In it, the author of the e-mail criticizes the agency's analysis structure and shares his sentiment that Stratfor's products were superior to the agency's.

"My charge against her was and remains that she took no pride in her craft and turned intelligence into PR and shoddy process," the e-mail author wrote. "She (the CIA analysis head) and her gang are now history. This gives Stratfor an enormous, historic opportunity. The CIA model of analysis has been invalidated. The ponderous, process driven machine that could only manage the small things now needs to be replaced by a robust, visionary, courageous analytic system. Stratfor has the opportunity to show the way."

Some of the e-mails raise questions about the extent to which Stratfor analysts go in gathering information.

In some of the juicier personal e-mails between colleagues, one seemingly jokingly implies that a female employee was sleeping with her sources in order to get information. But another e-mail that appears to be from Friedman took a much more serious tone when discussing how to get information from an Israeli intelligence informant.

"(Y)ou have to take control of him. Control means financial, sexual or psychological control... This is intended to start our conversation on your next phase."

Companies that offer services like Stratfor's often rely on a global network of informants - some of them paid - who supply information on various issues that are of particular interest to clients, but there are laws governing such activities.

In an e-mail dated in August of last year, news was reportedly shared that 19 brigadiers in the Pakistan army had been promoted to major generals. The comment at the top of the e-mail that appeared to be from a Stratfor employee read: "We have a source among these 19 and he is a rising star within the hierarchy and is seen as having a really good shot at the top job."

Also in an e-mail dated in August of last year, Friedman reportedly wrote, "We are retaining a law firm to create a policy for Stratfor on the Foreign Corrupt Practices Act. I don't plan to do the perp walk and I don't want anyone here doing it either."

The Foreign Corrupt Practices Act makes it illegal for "certain classes of persons" to make payments to officials in other countries for the purpose of either obtaining or retaining business opportunities.

More details about Stratfor will undoubtedly continue to surface in the coming weeks as WikiLeaks continues its slow rollout of corporate punishment by posting e-mails in batches at a time. The company says it is doing business as usual, only now with better security over its e-mail accounts.