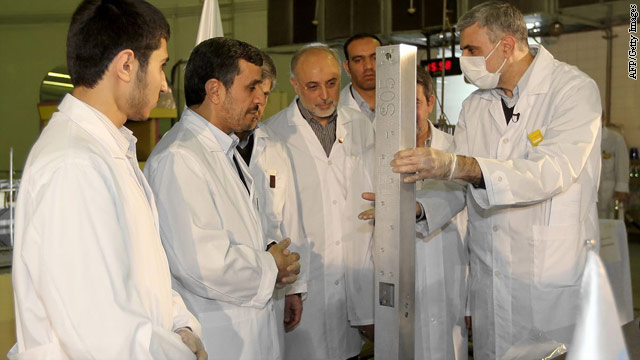 Is Iran another North Korea?

Last week the U.S. point man for talks on North Korea, Glyn Davies, met with his North Korean counterparts for the first time since the death of Korean leader Kim Jong Il and the subsequent transfer of power to his son Kim Jong Un.

The talks were aimed at reviving a proposal to exchange U.S. nutritional aid to North Korea for a halt to Pyongyang's uranium enrichment program.

The prospective deal was expected to lead to the resumption of disarmament talks between the two countries along with China, South Korea, Russia and Japan, and to more extensive quantities of food aid for North Korea. An announcement had been slated for the week Kim died, but was delayed to give the new regime a chance to regroup.

In an interview with CNN, Secretary of State Hillary Clinton spoke of "modest progress," but no breakthroughs.

"We've always said that we are willing to talk," she said in the interview. "This is the first time that, under this new leader, we've had this opportunity, and we'll follow through."

Since the so-called "six-party talks" effort began in 2003, North Korea has played a game of yo-yo with the world; following nuclear antics with gestures meant to demonstrate Pyongyang's commitment to halt its nuclear weapons program.

In 2005 the world powers and North Korea reached an agreement in which Pyongyang would abandon its nuclear program, resume compliance with the Nuclear Non-Proliferation Treaty (NPT) and allow international inspectors to return. In exchange, North Korea would receive food and energy assistance and a chance to normalize relations with the United States.

The administration refuses to acknowledge North Korea as a nuclear power although it's a distinction without a difference. North Korea has nuclear weapons and the test to prove it.

The United States is now trying to walk back a North Korean nuclear program that has matured while the international community allowed the regime to play for time to build a nuke under the guise of talking.

Is the U.S. now repeating these mistakes with Iran?

Last week Iran sent a letter that it was ready for talks on its nuclear program "as soon as possible." It was a delayed response to an October letter from European Union Foreign Policy Chief Catherine Ashton, who is leading contacts between Iran and the so-called "P5 plus one" group of nations, inviting Iran to a new round of talks aimed at forging an agreement to address international concerns over Iran's nuclear program. The P5 plus one group is made up of the five permanent members of the U.N. Security Council - the United States, the United Kingdom, China, Russia and France - plus Germany.

Tough sanctions on the regime have begun to trickle down to the Iranian people, and the suffering is sure to intensify once curbs against Iranian oil exports take effect in June. The United States and its allies believe those biting sanctions are what is bringing Iran back to the table.

We've been here before. The world's six major powers - Britain, China, France, Germany, Russia and the United States - first started negotiating with Iran over it's nuclear program in 2008. The following year, Iran reneged on an agreement to ship most of the enriched uranium it had made out of the country in exchange for fuel for the Tehran Research Reactor, which is used to make isotopes for medical diagnosis.

The last round of talks took place in January 2011 without any results. Since then, Iran's nuclear program continues to develop.

According to the most recent report by the International Atomic Energy Agency, Tehran continues to expand operations at its underground facility at Fordow, as well as at its Natanz site, producing uranium enriched to 20%, a key level of achievement if Iran decides to create nuclear weapons.

Fordow is built deep into a mountain near the city of Qom, making it difficult to attack. Nuclear development at that facility is considered a major flashpoint for Israel, which has fueled speculation Israel will argue that Tehran is nearing "the point of no return" in its development of nuclear weapons and will be forced to launch a pre-emptive strike.

Even as the regime seeks talks with world powers, Iranian officials refused last week to provide IAEA inspectors access to Parchin, a key military installation, and dismissed the concerns of inspectors as based on "unfounded allegations."

During her interview with CNN, Secretary Clinton called the Iranian actions "certainly troubling."

She was asked what the United States thinks is going on at Parchin and other sites the Iranians are preventing the IAEA from getting access to.

"We want to know what's going on in those sites," she said. "And the fact that they are secret, heavily protected sites seems to suggest something's going on the Iranians don't want the IAEA or the world to know about. That can only raise suspicions even higher than they already are."

The "P5 plus one" is ready to meet with the Iranians, Clinton said, "if they came to the table prepared to talk about their nuclear program."

But is this North Korea all over again with Iran simply playing for time, agreeing to an endless series of meetings over a course of years which ends with Tehran testing a nuclear weapon?