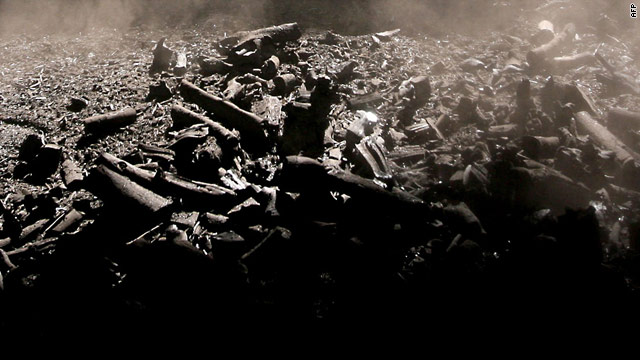 Secretary of State Hillary Clinton has arrived in London to attend a conference that will focus on how the international community can help stabilize the chaotic situation in Somalia. One issue getting attention – the role of charcoal.

A British sponsored resolution, currently making its way through the United Nations Security Council, aims to expand the current amount of troops in the U.N. peacekeeping mission in Somalia, and to expand their mandate to work beyond the Somali capital of Somalia. It also calls for a ban on charcoal out of Somalia because such exports have been used by al-Shabaab, the al-Qaeda linked terrorist group in Somalia, as a means to finance their operations.

“Much of the charcoal that flows out of south central Somalia is either taxed or owned by al-Shabaab’” a senior State Department official told reporters traveling aboard Clinton’s plane as it flew to London from the United States. “When charcoal flows out to Yemen, to Saudi Arabia, to places in the Gulf, al-Shabaab is able to tax this charcoal and to gain the resources from it.”

In addition to choking off a source for al-Shabaab coffers, the State Department says the charcoal ban would "help protect the very fragile ecological balance," in the southern part of Somalia.

Read the portions of the transcript on the charcoal ban:

SENIOR STATE DEPARTMENT OFFICIAL ONE: This resolution will also have a charcoal ban, which will prohibit the export of charcoal out of Somalia. Charcoal exports have been one way that al-Shabaab, the terrorist organization, has been trying to effectively earn money. The British will highlight the importance of this Security Council resolution tomorrow at its conference, but we hope that coming out of London, we will have a more united and galvanized international community committed to working towards the stabilization of Somalia, a international community more focused on dealing with the problems of terrorism, counterterrorism, and piracy that emanate from that country.

SENIOR STATE DEPARTMENT OFFICIAL ONE: Charcoal ban is designed to rob al-Shabaab of a source of income. Much of the charcoal that flows out of south central Somalia is either taxed or owned by al-Shabaab. When charcoal flows out to Yemen, to Saudi Arabia, to places in the Gulf, al-Shabaab is able to tax this charcoal and to gain the resources from it. We think that blocking this does a number of important things. First, it robs Shabaab of resources, but more importantly, it also helps to protect the very fragile ecological balance in the southern part of the country – a part of the country that is prone to drought and famine.

QUESTION: In terms of the charcoal ban, just practically, are there going to be any practical steps to prevent this? I mean, it’s a fairly lawless sea. How do you actually, practically stop it other than just saying people shouldn’t be selling it?

SENIOR STATE DEPARTMENT OFFICIAL ONE: The charcoal ban can be implemented by targeting the states that are importers of the charcoal. Focusing attention by the UN monitoring committee that looks into the implementation of existing sanctions on Somalia, directing them to look at imports of possible charcoal coming in from Somalia, looking at what Gulf states are importing. There is, and has been for a number of years, a committee established by the United Nations to look at the enforcement of existing sanctions. They can now take that under their purview and single out countries that may, in fact, be importing charcoal illegally from Somalia.

QUESTION: Who else besides Yemen is -

SENIOR STATE DEPARTMENT OFFICIAL ONE: I think there are large – I’m not going to identify states, but there are a large number of states in the Gulf that import charcoal from Somalia on a regular basis.