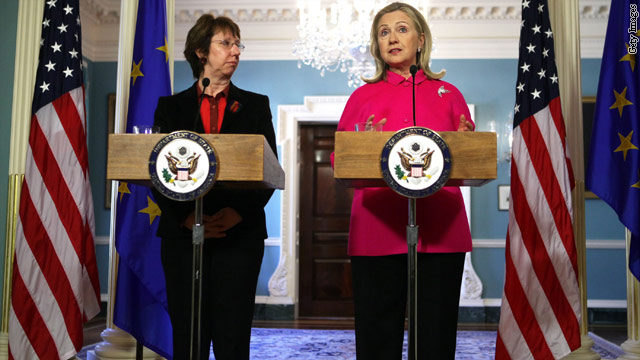 The United States and European Union Friday expressed cautious optimism that Iran is serious about returning to nuclear talks with world powers.

Secretary of State Hillary Clinton and EU foreign policy chief Catherine Ashton said they were weighing Iran offer to talk as soon as possible with the so-called P5 plus one group of nations..

In a letter to Ashton sent Tuesday, Iranian nuclear negotiator Saeed Jalili voiced Iranian's willingness for resuming talks in a letter to the Ashton.

We voice our readiness for dialogue on a spectrum of various issues, which can provide ground for constructive and forward-looking cooperation," Jalili wrote.

“It’s good to see that the letter has arrived and that there is the potential possibility that Iran may be ready to start talks,” Ashton told reporters after her meeting with Clinton. “We continue to discuss and make sure that what we're looking at is substantive but I'm cautious and I'm optimistic at the same time for this.

Clinton said the United States is mulling over Jalili's letter with the rest of the negotiating group - China, France, Russia, Britain and Germany. She noted the group’s redline for talks with Iran was that they must begin with addressing Iran’s nuclear program, which the letter does address.

“It’s fair to say that we think this is an important step and we welcome the letter,” Clinton told reporters. “This response from the Iranian government is one we have been waiting for and, if we do proceed, it will have to be a sustained effort that can produce results.”

That letter, a response to Ashton's October invitation, followed Iranian announcements of nuclear progress this week that included the development of sophisticated centrifuges and fuel rod production.

President Mahmoud Ahmadinejad was on hand Wednesday to load the first domestically-made fuel rods into the core of a Tehran reactor.

Iran hailed the developments as significant but the U.S. State Department, dismissed them as bluster for a domestic audience.

"We frankly don't see a lot new here," said spokeswoman Victoria Nuland. "The Iranians for many months have been putting out calendars of accomplishments and based on their own calendars they are many, many months behind."

Still, the United States and its allies claim Iran is developing a nuclear weapon; Iran has insisted all along that its nuclear program is solely intended for civilian energy purposes.

After a scathing IAEA report in November that lent credence to Western beliefs about Iran's intentions, tensions between the Islamic republic and its foes have spiked.

The situation grew more grave as speculation arose that Israel may launch a preemptive strike to set back Iran's nuclear program.

Western punitive measures have stung the Iranian economy, though it was unclear whether Iran's offer for talks were a result of sanctions or a play for time.

Swedish Foreign Minister Carl Bildt said in Vienna Friday that sanctions can "never be a policy in itself."

"We have pursued from the EU side a twin-track policy: sanctions in order to reinforce the diplomatic search for solutions," Bildt said. "And whichever way you look at it there is no other solution but a diplomatic and a political one."