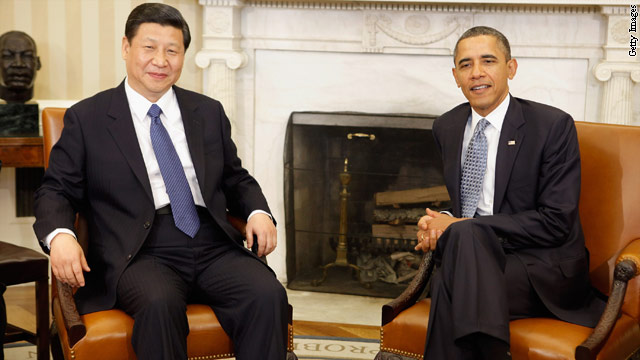 But when it comes to a greater embrace of American interests, China's own internal systems will likely keep that from becoming reality any time soon.

There was a lot of truth in Vice President Biden's statement Tuesday to Chinese Vice President Xi Jinping that the two countries are "not always going to see eye to eye." China's recent veto of a resolution on Syria, along with Russia, at the United Nations Security Council bears testament to that.

To be sure, there is a fair amount of alignment in U.S. and Chinese thinking from the proverbial 30,000-foot view. Both countries want the global economy to grow at a faster pace, and both agree Iran should not have a nuclear weapons program.

But many times the end result is U.S. frustration at China's reluctance or refusal to adopt the same course the United States and other western countries are taking on an issue.

"Many of China's policies on external foreign policy issues are really driven by China's domestic concerns and priorities," Bonnie Glaser with the Center for Strategic and International Studies told CNN. As China's economy continues its breakneck growth, China, for example, does not want to jeopardize its growth by suddenly cutting the 11% of its oil it imports from Iran.

As the United States leads an international sanctions regiment meant to severely cripple the Iranian government over its nuclear program, China's own domestic concerns guide its policies of advocating more carrots than sticks when it comes to how to approach the Iranian nuclear program.

There is also a bit of paranoia at play when it comes to China's understanding and sometimes arms-length approach to American foreign policy.

Many China watchers say China is skeptical and suspicious of U.S. strategy in the Asia-Pacific region as seeking to "contain" its rise, or even support instability that could force a regime change like that seen in Arab Spring countries, or in recent revolutions in Central Asia.

Then there is U.S. agitation over commercial access and protection of American goods and services in the world's second largest economy.

Once again, China is usually reluctant to cede to demands the United States and other countries make for a more level playing field, lest it moderate economic advancement.

"Over the last few years there's been increasing frustration by the (U.S.) business community about practices that China engages in that they view as being mercantilist and creating an uneven playing field," said Michael Froman, the Obama administration's deputy national security adviser for international economics.

That frustration is mostly borne out of a Chinese economy dominated by state-owned companies that are fiercely protective of a wide network of entrenched interests, with corruption running rampant.

"There are many people who would suffer if they were forced to accept" true protection of global intellectual property rights or elimination of Chinese policies that greatly favor domestic companies, Glaser said.

There are simply too many individual constituencies, along with benefits and subsidies that support the current Chinese system to welcome any greater U.S. involvement in the Chinese economy, analysts say.

Xi's visit is being framed as an opportunity to build a relationship with the man "likely destined to be a central figure in the Chinese political system for years to come," according to Daniel Russel, senior director of Asian affairs at the National Security Council.

President Obama and other senior officials will look to build on Sino-U.S. ties with the next Chinese leader in hopes of paving the way for greater Chinese understanding of U.S. policy.

Analysts like Glaser do not discount the possibility that Xi's likely presidency could be more focused on longer term strategic interests that take U.S. concerns into greater account. Just don't expect a fundamental shift in the Chinese treatment of American concerns overnight.

"It is very difficult for any one individual in China to have that much power to be able to fundamentally change the system," Glaser said.