CNN Poll: Most Americans see no U.S. obligation in Syria

Nearly three-quarters of Americans believe the United States does not have a responsibility to do something about the fighting in Syria between government forces and anti-government groups, according to a new national survey.

In a CNN/ORC/International poll released Tuesday, 73% of Americans said the U.S. has no obligation to respond to the ongoing unrest, while 25% agreed with the notion. Two percent had no opinion.

Crossing the Strait of Hormuz

What's it like to ply the waters of the Strait of Hormuz as Iran threatens military action in the strategic waterway?

CNN's Frederik Pleitgen is aboard the USS Abraham Lincoln and takes a look. 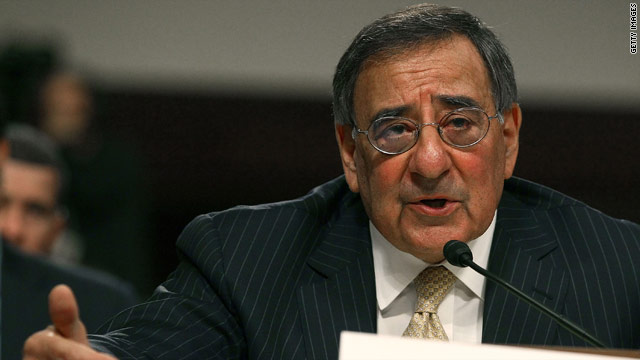 Secretary of Defense Leon Panetta said Tuesday that he has no position on whether Israel will strike Iran by this spring, a denial of recent reporting by the Washington Post and by CNN that he believed that to be the case.

Panetta said he talked with Washington Post columnist David Ignatius, who reported earlier this month that: "Panetta believes there's a strong likelihood that Israel will strike Iran in April, May, or June, before Iran enters what Israelis describe as a zone of immunity to commence building a nuclear bomb."

In inquiring about the report, CNN's Barbara Starr was told by a senior administration official that Panetta had come to the conclusion there is a growing likelihood Israel could attack Iran sometime this spring. The official told CNN that Panetta was basing his conclusion on a "confluence" of intelligence. END_OF_DOCUMENT_TOKEN_TO_BE_REPLACED

By Barbara Starr at the Pentagon and Masoud Popalzai in Afghanistan

Two children have been rearrested in southern Afghanistan for being prospective suicide bombers, the International Security Assistance Force said.

The two "young male" would-be bombers were detained in the past week, the ISAF said in a written statement.

The two kids, both ten years old, were arrested along with three adults, according to the Afghanistan National Directorate of Security (NDS).

Last summer, Afghan President Hamid Karzai pardoned a group of would-be child suicide attackers ranging in age from 8 to 17. Some of the 20 youngsters told Karzai they had been recruited by the Taliban, strapped with vests and ordered to detonate them near foreigners, the president's office said in a statement last August. END_OF_DOCUMENT_TOKEN_TO_BE_REPLACED 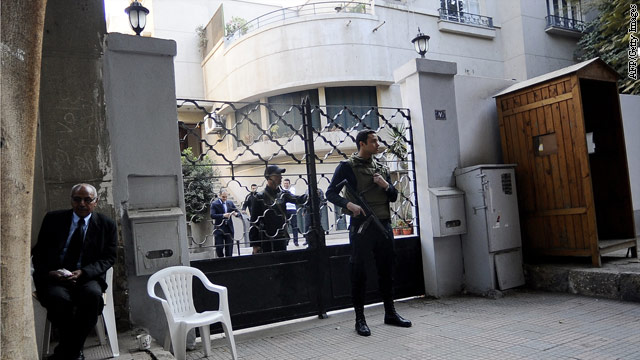 Egyptian soldiers stand guard in front of the offices of the National Democratic Institute in Cairo.
February 14th, 2012
04:31 PM ET

The United States has received a document from Egyptian authorities that lays out charges against the staff of U.S. and international democracy-building groups, the State Department said Tuesday.

"Our lawyers who we dispatched from Washington to the embassy have now received a 24-page document in Arabic," State Department spokeswoman Victoria Nuland told reporters. "It was given to us by the Egyptian deputy prosecutor general. We are now translating the document."

The development clears up confusion that arose last week when Nuland said initially that the United States had received the document, then said a day later that no such document had been received. She attributed the discrepancy to "miscommunication" between the U.S. Embassy in Cairo and the State Department in Washington.
END_OF_DOCUMENT_TOKEN_TO_BE_REPLACED 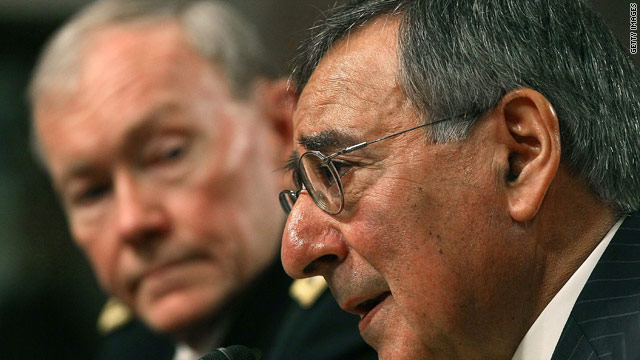 Defense cuts a "test" of Congress

Some of the Senate's big guns opened fire Tuesday on the new defense budget request, calling it "unacceptable" and saying they were "seriously concerned."

But the Pentagon's biggest gun fired back, with Defense Secretary Leon Panetta telling the members of the Senate Armed Services Committee that the budget is Congress' test of whether cutting the deficit is about "talk or action."

Tuesday's hearing was the start of several days of testimony on Capitol Hill focused on the 2013 defense budget request that proposes cuts of tens of thousands of troops, reduces the U.S. fleet of warplanes and slows down ship-building in order to meet billions of dollars in cuts mandated by Congress when it passed the Budget Control Act last summer.

END_OF_DOCUMENT_TOKEN_TO_BE_REPLACED 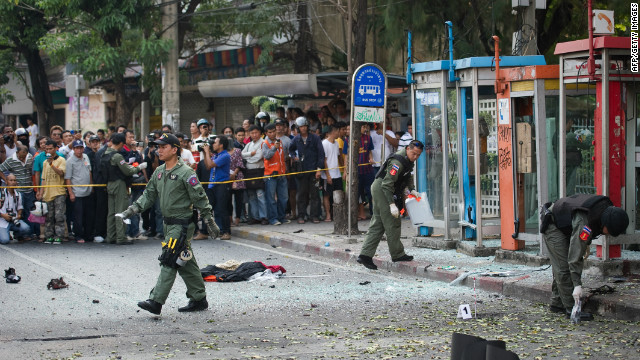 State Dept has no proof Iran behind recent attacks. But...

By Elise Labott
The Obama administration doesn't know for sure whether Tuesday's blasts in Thailand were the work of Iran or one of its proxies, but that's not stopping the State Department from drawing a link to an "uptick in violence" to Iran.

"We obviously condemn this attack," State Department spokeswoman Victoria Nuland said Tuesday. Even as she noted the Thai authorities were investigating the incidents, she went on to draw a parallel between Tuesday's attacks in Bangkok and Monday's attacks against Israeli diplomats in India and Georgia, both of which are also under investigation. END_OF_DOCUMENT_TOKEN_TO_BE_REPLACED 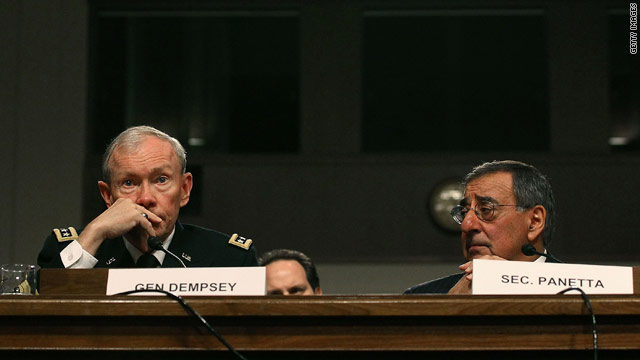 Hacking by China not necessarily a "hostile act"

The U.S. top military officer said should China's military be found to be behind hacks into the U.S. infrastructure, it would not necessarily be a "hostile act."

Gen. Martin Dempsey, the Chairman of the Joint Chiefs of Staff, said he "believe(s) someone in China is hacking into our systems and stealing technology and intellectual property which at this point is a crime."

But Dempsey told the Senate Armed Services Committee where he was testifying that he cannot attribute the Chinese hacking to China's military, the People's Liberation Army. END_OF_DOCUMENT_TOKEN_TO_BE_REPLACED 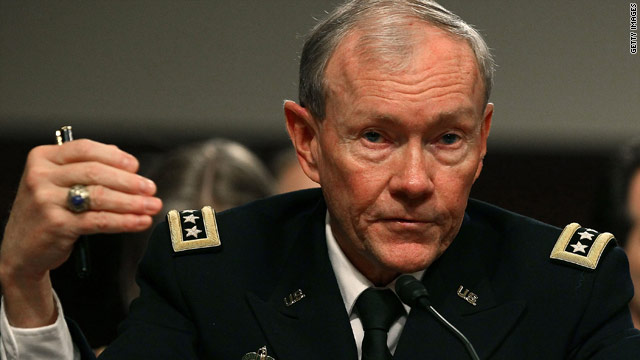 The nation's top military officer said he is "concerned" about transferring prisoners from Guantanamo in a deal to bring the Taliban to the negotiation table.

The deal to transfer five Taliban prisoners has not been decided on but the Obama administration has had the intelligence community assess the prisoners being considered. END_OF_DOCUMENT_TOKEN_TO_BE_REPLACED

The Taliban have met with U.S. officials to discuss possible peace talks, but do not want to negotiate with Afghan President Hamid Karzai's government, a Taliban spokesman said Tuesday.

The spokesman's comments, rejecting a key American condition, could potentially derail American efforts for Afghans to reach a negotiated end to the decade-long war.

In an e-mail response to questions from CNN, Taliban spokesman Zabiullah Mujahid denied previous reports that the Taliban had been invited to meet with the Karzai government in Saudi Arabia, saying that talks with what he called a "puppet" government were pointless.