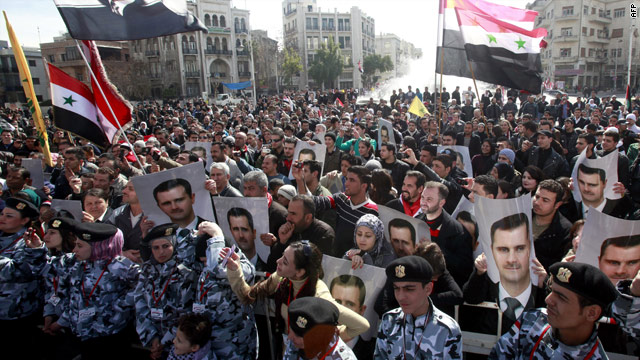 First off, any U.N. action would need a Security Council resolution. And given Russian and Chinese support for Damascus, that prospect isn't looking so promising.

Plus, it goes without saying that a peackeeping force would need the buy-in from President Bashar al-Assad, who seems to prefer to launch artillery and tank fire at civilians without the prying eyes of international monitors.

"We don't know that it is going to be possible to persuade Syria," Clinton said. "They have already, as of today, rejected that."

Standing next to Turkish Foreign Minister Ahmet Davutoglu Monday after several hours worth of talks in which options to address the growing humanitarian crisis in Syria and increase pressure on the al-Assad regime topped the agenda, Clinton called the escalating violence "deplorable." Turkey, too, has been at the forefront of those calling for tougher measures against the al-Assad regime.

Clinton and Davutoglu said they would attend the first meeting of the newly-formed "Friends of Syria" group in Tunisia next week. In the run-up to the Tunis talks, Clinton said Washington will work with Turkey and other nations to promote a political process for a Syrian transition, increase outreach to the Syrian opposition and allow the entry of emergency medical supplies. The United States, she said, is increasing funding of aid organizations like the Red Crescent and Red Cross and is working directly with grassroots Syrian groups to help people without electricity, food and clean water.

Davutoglu also spoke of the dire need to obtain humanitarian access to Syrians in need. He said next week's meeting in Tunis "will be an important international platform to show solidarity to (the) Syrian people and to send a strong and clear message to (the) Syrian regime that they can not continue this."

The minister brought contingency plans for military options in Syria to discuss with U.S. officials in the event the violence spirals out of control and Turkey faces an influx of refugees at its border, diplomatic officials said. He stressed a political solution was preferable but told reporters the international community needed to keep its options open as the crisis unfolds.

"At this moment we are talking on diplomatic and humanitarian steps to be taken. But for other scenarios, we hope that those things will not be needed," he said.