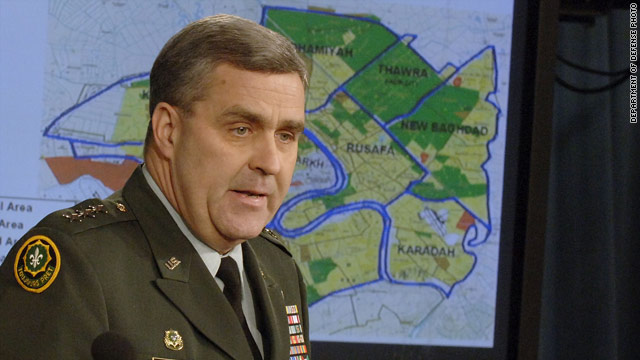 The White House is considering nominating a retired general with little recent combat field experience to be the new commander of NATO and U.S. military operations in Europe, a senior administration official has told CNN. The official has direct knowledge of internal administration deliberations on the nomination.

Several officials emphasized that no final decision has been made by President Barack Obama but also confirmed that retired Lt. Gen. Douglas Lute, currently a top White House aide, is a leading candidate.

Lute, who retired from the military in 2010, coordinates Afghanistan and Pakistan affairs at the White House, a job he also performed while on active duty for both Presidents Obama and George W. Bush.  In his White House role, Lute has often clashed with Pentagon and military officials over war policy, including the troop surge in Afghanistan.

If nominated and confirmed by the Senate, he would serve as the head of the U.S. European Command, and as the military head of NATO as supreme allied commander in Europe, at a sensitive time.  The United States is trying to keep NATO allies committed to the war in Afghanistan. NATO also could wind up supporting any United Nations tasks in Syria.

While the move to bring back a retired general is very unusual, it is not unprecedented.  During his tenure as defense secretary, Donald Rumsfeld orchestrated the return to duty of retired Army Gen. Peter Schoomaker to become chief of staff when he felt there were no suitable candidates.

The current commander in Europe, Adm. James Stavridis, was previously commander of U.S. Southern Command in Miami. He is scheduled to retire this summer.

"This is a head scratcher," the senior administration official said of a potential Lute nomination.  Several civilian and military officials made similar remarks to CNN but none would allow their names to be used because they were speaking ahead of the actual confirmation.  "There is a sense inside the Pentagon that there are highly qualified, currently serving four-star officers with combat experience who would be very strong candidates."

A senior U.S. military officer with extensive combat experience in commanding troops also told CNN, "No matter how you color it, this means the president believes there is no currently serving military officer who can do the job. "The officer expressed further concern saying he believes many in the military will view this as a political decision by the White House to put a now-civilian political operative into a military job overseeing NATO involvement in Afghanistan, offering NATO "best political advice rather than best military advice."
He said, "This is politics a bridge too far."

"People like Doug Lute, but people inside the building feel currently serving officers are the recommended way to go," the official added.
The official declined to be identified because of the sensitivity of the situation.  But even on background it is highly unusual for officials to weigh in on White House military nominations before they are announced.

The level of sensitivity about the issue of bringing a retired general back on active duty for one of the most sought-after jobs in the military is significant. Pentagon officials privately acknowledge they fear it will be interpreted as a sign of Obama's lack of confidence in the current senior military officer corps.

Defense Secretary Leon Panetta's press secretary George Little declined to comment other than to say the decision is up to the president.

The White House may be looking for ways to keep Lute close to the President.  White House national security spokesman Tommy Vietor declined to confirm whether Lute is a leading candidate, but he but told CNN, "Doug Lute's career in the Army speaks for itself. And he has advised two different presidents from two different parties on two different wars - serving more than five years at the heart of policy deliberations in the (National Security Council) in difficult national debates."

"I am not engaging in your rumors here. Fact is that the President wants and needs Doug right where he is as we continue implementing the Lisbon guidance on Afghanistan and rebuilding the critical relationship with Pakistan," Vietor added.

But the level of reaction inside the Pentagon remains significant.  In his White House job Lute often clashed with Pentagon and military officials over war policy including the troop surge into Afghanistan.

"Many people are uncomfortable," with a retired officer being brought back on active duty when there are so many current three and four stars who served recently in Iraq and Afghanistan," the administration official said.  Lute has not served in a senior position in either theater.