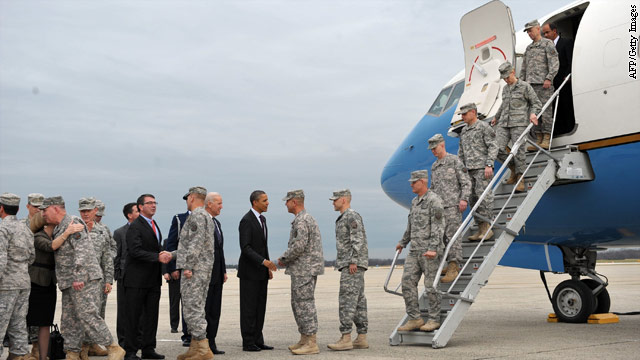 President Obama and Vice President Biden take part in a ceremony to mark the return of the US Forces - Iraq colors on December 20, 2011 at Joint Base Andrews in Maryland.
February 6th, 2012
08:59 AM ET

The White House plans to hold a formal dinner in the coming weeks honoring Iraq war veterans, the fallen and their families, White House spokesman Jay Carney said on Monday.  The dinner will be held on February 29th.

The dinner for some 200 people will include military personnel of all ranks, but the focus will be on enlisted personnel who served in Iraq, according to a Department of Defense official. The dinner comes as the veteran’s advocacy group Iraq and Afghanistan Veterans of America has been pressing for a ticker tape parade to specifically honor veterans of the Iraq war. The senior official said top US military officers are opposing holding a parade for the Iraq war, “while there are still troops in harms way,” fighting in Afghanistan. “A New York city style ticker tape parade has come to represent a major national tribute,” the official said.

But some vets disagree. “After eight years of war there that saw over 4,400 American troops killed and over 32,000 wounded-in-action physically, the Iraq War finally ended on December 31, 2011. Yet, only St. Louis has held a “Welcome Home Our Heroes” parade to date–and solely because two guys launched a Facebook page and motivated a grassroots group of citizens,” said IAVA founder Paul Reickhoff.

The only formal ceremonies to honor the end of the war in Iraq were a small flag ceremony in Baghdad on December 15, and a another small ceremony at Andrews Air Force Base a few days later.