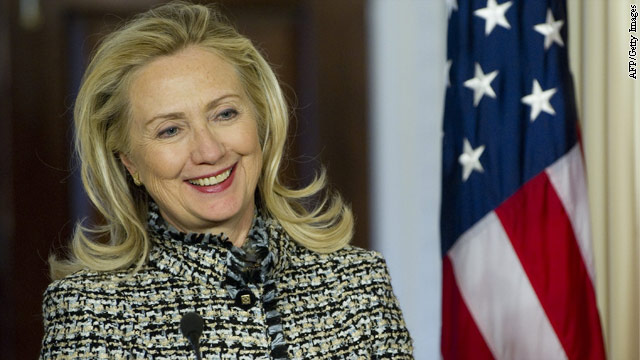 While much of the country is looking ahead to the next election, Hillary Clinton said she is squeezing every last moment out of her current job.

As secretary of state, Clinton isn't allowed to campaign or participate in domestic politics.

"It is a little odd for me to be totally out of an election season," the former presidential candidate and senator admitted to State Department employees Thursday during a town hall meeting.

Clinton said she hasn't even watched any of the many Republican presidential debates so far.

Foreign service officers are also expected to remain politically neutral in conducting their jobs, but there were clearly a few Clinton fans in the room. One woman asked Clinton whether she could be persuaded to stay as secretary of state or even run for vice president, reflecting rumors that Joe Biden might step down and President Barack Obama would ask Clinton to join the ticket for his re-election bid.

Clinton wouldn't bite, saying Biden "does an excellent job" and is a "huge advocate and supporter" for the State Department and its sister organization, the U.S. Agency for International Development.

The secretary of state said, as she has many times before, that she's done with government after this presidential term.

"I have made it clear that I will certainly stay on until the president nominates someone and that transition can occur," she said. "But I think after 20 years, and it will be 20 years, of being on the high wire of American politics and all of the challenges that come with that, it would be probably a good idea to just find out how tired I am. Everyone always says that when they leave these jobs."

Elections, she said, "I'm sure will suck up a lot of the attention from following areas that we think are so important." She cited resolving longstanding conflicts, helping bring people around the world out of poverty and trying to build up America's reputation as some of the issues she wants to continue to advance before she leaves office.

There is an upside to American being distracted by the election, Clinton pointed out: "The good news is maybe we could even get more done if they are not paying attention."

Which is why Clinton said she is looking forward to her last year in office and doesn't want to divert attention from the important work of U.S. foreign policy by even thinking about her next move.

Not even a casual thought?

"From my perspective, I will just work as hard as I can until the last minute I have the honor of being secretary, and certainly do everything no matter what I do, which I have no idea what it will be, to support all of you"

Oh, she probably has some idea.

Do you have any ideas for Clinton's next move? Weigh in below in our comment section.