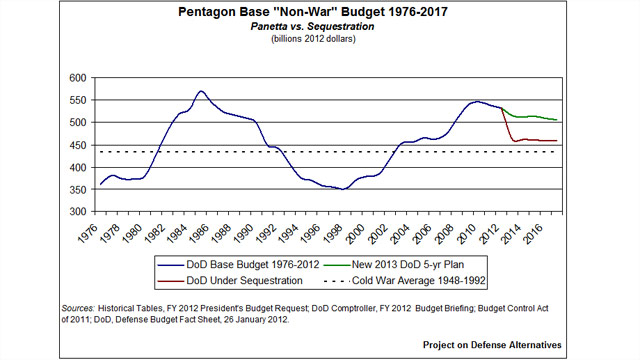 Mention cuts to the U.S. Defense Department budget and you’ll hear that it’s either a catastrophic mistake or you’ll get hollering from those that say the fat hasn’t even started to be trimmed. Perhaps a look at the numbers could bring some clarity to situation. The Project on Defense Alternatives seemed to think so when they put out the chart above that plots out the Defense Department’s base budget, the budget minus war spending, starting in the late 70’s after the Vietnam War.

The defense policy think tank, which argues that defense spending could be cut further, shows that when looking at the bigger historical picture projected cuts are nowhere near the lows of the 90’s, often referred to as the “Peace Dividend”, after the Cold War. Even after sequestration cuts that would slash the Pentagon budget by another $500 billion, a scenario that Defense Secretary Leon Panetta referred to as “doomsday”, the base budget would still be higher than the average spending during the Cold War in the 1980s.

All numbers have been adjusted for inflation, the group says, according to Defense Department estimates.

Leave a Reply to Valentin Sferrazza