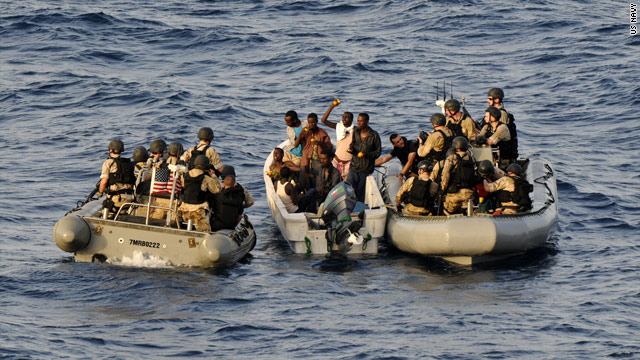 The number of successful hijacks has declined in the past year. In 2010 47 ships were hijacked; last year the figure was 25, according to the EU Naval Force, which co-ordinates naval patrols in the region. This year there have been nine attempted attacks but no seizures.

Maritime sources say that decline is partly because foreign navies patrolling the waters off the Horn of Africa have been more aggressive.

In addition, merchant vessels sailing in the area are taking tougher on board security measures, like hiring armed guards, putting razor wire around decks and building strong-rooms on board where the crew can shelter from the pirates after immobilizing their vessel. And recently weather conditions have been rough, so pirates in their small skiffs have not been able to capture large valuable vessels.

Even so, EUNAVFOR estimates that in 2011 alone there were some 30 ransoms paid, totaling $147 million.

It’s not clear that the gunmen who seized the two aid workers on October 24th last year were connected to any pirate groups. Pentagon spokesman John Kirby said Wednesday: “We don't have any firm indication that there was a connection to piracy although piracy is nothing more than a crime.”

The pair were seized in the town of Galkayo, some 200 kilometers from the coast, as they traveled in a convoy to the local airport. The members of pirate gangs and groups of roving bandits may well be interchangeable, according to experts in the region – and as piracy has become riskier, abductions of aid workers and foreign journalists may be a lucrative alternative.

Candyce Kelshall, a fellow at Buckingham University Center for Security and Intelligence Studies says of Tuesday’s rescue that it represents “an escalation in the unfolding drama of Somalia.

“A change in tactics to land-based kidnapping means we will see more incidents of this nature,” she told CNN.

Only last weekend, an American writer was abducted, reportedly as he traveled between Galkayo and Hobye.

John Steed says that there are about thirty hostages still being held in isolation in Somalia. "They have no governments, no big companies, no rescue operation" to rescue them. Steed points out that while vessels are released when a ransom is paid, pirates sometimes keep the hostages and try to extort more money for their release.

According to EUNAVFOR, about 155 people are being held against their will aboard five ships. The average number of days they’ve been held is 178. But the 24 crew members of the M/V Iceberg have been held for nearly two years.

It is possible, according to some maritime security experts, that some of the pirates’ hostages could be moved from sea to land.

What seems less likely – though cannot be ruled out – is that the kidnappers in this latest case had links to militant Islamist groups. This part of Somalia, on the border with the self-declared “country” of Puntland, is not a stronghold of al Qaeda affiliate of Shabaab, though elsewhere in Somalia criminal gangs are rumored to have “bought” foreign hostages from Shabaab factions. Another Pentagon official, George Little, says of Tuesday’s targets: “They were not Al Shabab. They were suspected criminals."

Many of those who first became pirates in 2005-06 used to be fishermen. In the absence of any protection of Somali waters, their fishing grounds – rich in tuna and mackerel – were swamped by foreign trawlers that vacuumed up stocks, leaving the men of towns like Hobyo and Eyl without a livelihood.. A United Nations report estimated that nearly $100 million in potential seafood revenue was plundered in 2005.

One local fisherman from Bossaso claimed last year that some foreign trawlers sprayed local boats with boiling water from cannons. Other fishermen have themselves become victims of the pirates, having their gear and boats stolen; or they have been mistaken for pirates and been fired at by guards on board merchant ships. In the end, many came to the conclusion that belonging to gangs hijacking bulk carriers and tankers was a much more lucrative business, and no more dangerous than going fishing.

Steed says the proceeds of piracy have not helped the region. They are "creating a false economy,” he says, which will not bring long-term jobs.

But if you are a Somali being showered with $100 bills for releasing a hijacked ship, a long-term job may not be your top priority.