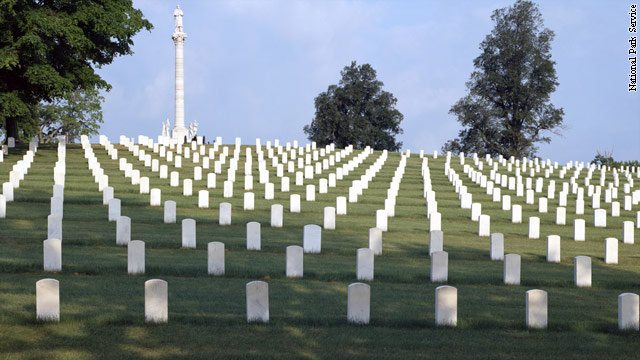 More than 120 graves in military cemeteries across the country are misidentified, the Department of Veterans Affairs said Tuesday.

At least 115 headstones were found to be misaligned, meaning they were set over the wrong grave, according to the department, and eight people were buried in the wrong spot.

The review was ordered in October by the National Cemetery Administration (NCA), which oversees the military cemeteries, after workers at Fort Sam Houston National Cemetery in San Antonio, Texas, discovered that 47 headstones were in the wrong spot. All were one grave away from where they were supposed to be.

Due to the misalignment, four people at the Texas cemetery were buried in the wrong grave. Deceased family members, such as a husband and wife, are often buried together in the same plot. But since the markers were off, the four people were buried with strangers.

"VA discovered this issue ourselves as a part of regular operations and took corrective action," VA said in a statement. "NCA strives for accuracy in its service to all veterans and their family members, and deeply regrets the errors which have occurred."

The four misplaced graves at the Fort Sam Houston cemetery have since been relocated to the correct grave sites, one spot over.

In all, 1.3 million headstones and markers were audited at 85 VA national cemeteries and one Confederate Cemetery from the Civil War. The discrepancies found amounted to less than 1% of those reviewed.

The cemeteries reviewed were chosen because they had undergone renovation projects to "raise and realign" headstones and markers in the past 10 years.

Errors at VA cemeteries, the department said, were made primarily by contractors who were conducting regular maintenance on the grave sites, and not by VA employees. Due to natural erosion, headstones are replaced when they are cracked or damaged, and realigned over the grave when soil shifts over time. Headstones were not put back in the correct spot during these maintenance operations in the cases where the errors were found, the department said.

In the future, when headstones are raised from graves for realignment, they will stay at the grave site instead of being moved to another location to prevent these errors, VA said.

The historic Arlington National Cemetery, which is run by the Army, has been engulfed in scandal since 2010, when it was discovered that there were hundreds of mismarked graves, burial urns put in a spillage pile, and missing burial records. The problems were blamed on a dysfunctional management team, missing documents, and poor record-keeping.

The Department of Veterans Affairs currently maintains 3.1 million graves in 131 cemeteries. The cemeteries not reviewed in the current report will be audited in the future, the department said.