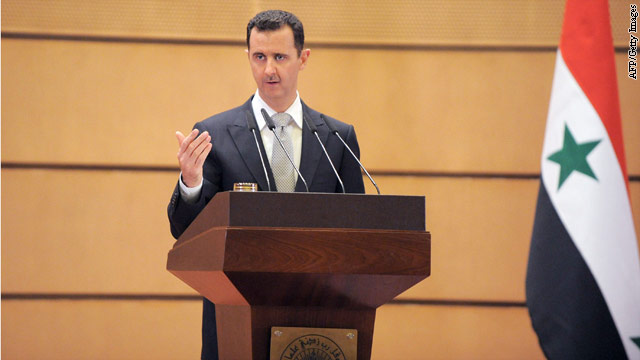 "Our firm belief is that any country that is still trading in weapons and armaments with Syria really needs to think twice," Nuland said, "because they are on the wrong side of history, and those weapons can be used against innocents and have been."

The United States already is asking Moscow to explain why a Russian ship reportedly delivered munitions to Syria earlier this month in violation of European Union sanctions. Nuland said Moscow so far has not given any "clarity" on the shipment.

"Issue number one on his agenda there is Syria," she said, as well as U.S. efforts to muster support for the U.N. Security Council condemnation of the Syrian government's violent crackdown on demonstrators that, according to the United Nations, has killed 5,400 people in 10 months.

Nuland said the United States has frequently warned Moscow "about how dangerous we think it is to be continuing to trade in weapons and encouraging them to do what they can to stop such trades."

Russian Foreign Minister Sergey Lavrov dismissed any idea that Moscow needs to explain any arms sales to the Assad regime, which has been carrying out a violent crackdown.

Deputy Prime Minister Dmitry Rogozin also cautioned, "No one must interfere with Syria. This is dangerous."

Behind the scenes, however, there are signs the Kremlin may be quietly adjusting its position.

In comments quoted by Russia's Itar-Tass news agency, Mikhail Margelov, a member of Russia's Parliament and President Dmitry Medvedev's special Africa representative, indicated that Russia has run out of methods to stop the international push for al-Assad to step down.

Russia's veto of the U.N. Security Council resolution, he said, "was the last instrument allowing Bashar Assad to maintain the status quo in the international arena" and was a "serious signal to the president of Syria from Russia. This veto has exhausted our arsenal of such resources."

Matthew Rojansky, a Russia expert at the Carnegie Endowment for International Peace, tells CNN that, by selling fighter trainers or supplying munitions to Syria, Russia is trying to send a signal to the West not to attempt any Libya-style "regime change" there.

"It's not that Assad is objectively so important," Rojansky said, "it's that Russia is absolutely drawing a red line vis-a-vis the Libya precedent."

He added, "I don't think they are interested in seeing the Assad regime continue to use weapons against its own citizens. They've been pretty clear that they oppose the bloodshed. So they're not arming him so that he can win in a confrontation. They would like to be the ones that broker an end to the confrontation."

The arms sales, he says, are not major. If Russia sold Syria the S-400 anti-aircraft weapon system, he says, that would be significant.

The latest moves are "intentionally brash, intentionally public, coming in quick succession," he says, "and that's because it's about signaling."

Syria is not the only global hot spot where Russia stands to frustrate U.S. policy. On Tuesday, Russia's Foreign Ministry lambasted a fresh set of tough EU sanctions against Iran's oil sector as "deeply erroneous."

The sanctions, which aim to cut off imports of Iranian oil and freeze assets in an effort to starve the country's nuclear program of funding, are unlikely to drive the Islamic Republic to give up its nuclear program, or could even be counterproductive, the Russian foreign ministry said in its statement.

And Sergey Lavrov, Russia's foreign minister, told a group of reporters there is nothing substantive at this point to even indicate Iran was building an atomic weapon.