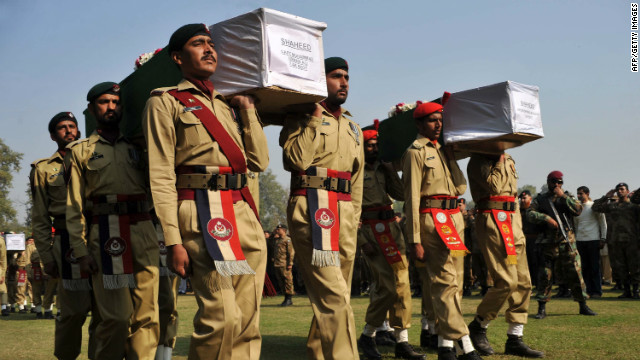 US report "contrary to facts"

Pakistan released a report Monday laying out its version of a cross-border airstrike by U.S. and coalition forces that left 24 Pakistani soldiers dead, repeating its disagreement with the U.S. version of events.

"The fundamental cause of the incident of 26th November 2011 was the failure of US/ISAF to share its near-border operation with Pakistan at any level," Pakistan military's report said.

The U.S. military's investigation of the event, led by Gen. Stephen Clark, says "the catalyst for the engagement was the opening of fire by PAKMIL (Pakistani military) Forces."

Pakistan said the American report "is structured around the argument of 'self defence' and 'proportional use of force,' an argument which is contrary to facts and therefore self-serving." It says there was "sustained aggression which continued for as long as '90 minutes' despite US/ISAF being informed about the incident at multiple levels by Pakistan military."

The United States repeatedly asked Pakistan to cooperate with Clark's investigation so he could get a clearer understanding of the incident, Pentagon officials have said. Pakistan refused the requests.

Still, Department of Defense spokesman Capt. John Kirby said Pentagon officials "stand 100% by the findings of the investigation that Gen. Clark did."

And while the Pentagon puts much of the blame on Pakistanis who fired on coalition troops, the American investigation also found problems with some U.S. actions during the clash. Clark's report found that "miscommunication and imprecise terminology" between various coalition units, including U.S. Special Operations troops, "resulted in a false understanding of there being no PAKMIL in the area."

The Pakistani report said that even putting part of the blame on its forces is wrong.

"There have clearly been several failures on the part of US/ISAF/NATO. Trying to affix partial responsibility of the incident on Pakistan is, therefore, unjustified and unacceptable," it said.