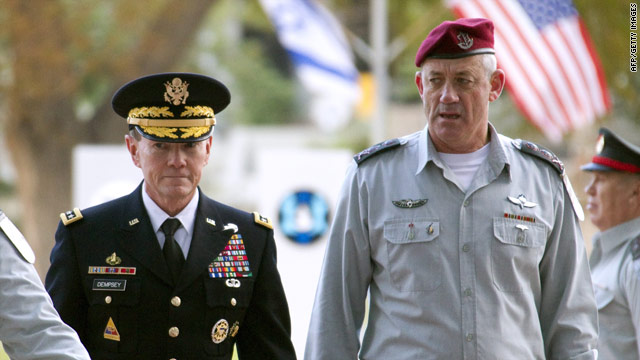 Gantz echoed the importance of cooperation between the two nations but appeared to allude to differences in policy approaches.

"I do know that both our countries share the same interests, both the same values, and I'm sure that we can somehow work it out together," Gantz told Dempsey during the course of a pre-meeting photo-op.

In a later meeting, Dempsey was told by Israeli President Shimon Peres that Israel had trust in the United States military and "that even today in a very complicated situation we can find a common ground."

Dempsey's trip, which officials on both sides would only describe as an opportunity to discuss regional security issues, comes as tensions over Iran's nuclear program have been on the rise.

The Obama administration has been pushing allies to sign on to sanctions targeting the Islamic republic's oil industry and central bank, while Iranian leaders have been issuing threats to close down the Strait of Hormuz, a critical transit point for one-fifth of the world's oil. The United States has warned Iran against such a move.

Officials in Washington hope that a tightening noose of sanctions will force Iran to abandon what the White House believes is an Iranian quest for nuclear weapons capability. Iran denies that it is seeking nuclear weapons and insists that its program is purely civilian in nature.

Dempsey's visit to Israel at this time is widely viewed as an effort by the United States to convince Israel to give sanctions more time to work and to head off any unilateral Israeli military move against Iran.

While the Israeli government has welcomed the moves for tougher non-military measures against Iran, some Israeli officials have questioned American resolve in application of the sanctions.

Sunday Israel's Deputy Prime Minister Moshe Ya'alon told Israel radio, "In the U.S. administration there is hesitation for fear of oil prices rising this year, out of election-year considerations" which he described as a "disappointment" for Israel.

Leave a Reply to Anooreext