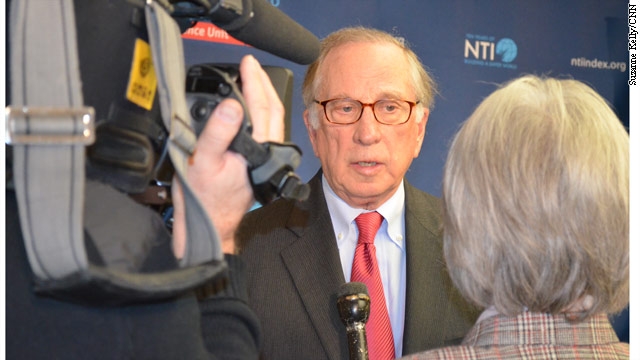 "If terrorists succeeded in blowing up a large city somewhere in the world, the result would be catastrophic," NTI co-chair and former U.S. Sen. Sam Nunn told a group of journalists and nuclear experts in Washington before laying out just what that would look like. He described a "human toll of hundreds of thousands dead and injured, and disruptions to global commerce and global confidence, and long-term environmental and public health consequences."

Nunn and CNN founder Ted Turner are co-chairs of NTI, which teamed up with The Economist Intelligence Unit, the research arm of the publication that puts out the Economist magazine, to gather and compile a ranking of security conditions in 176 countries.

Some of the countries that did not have what is considered "weapons-usable" materials were ranked on a subset of those categories.

At the top of the overall list, (meaning it did the most comprehensive job across all categories) were Australia, Hungary, Czech Republic,Switzerland and Austria. Ranking near the bottom were India, Vietnam, Iran, Pakistan and North Korea.

The U.S. ranked 13th on the list, in part because of its failure to sign on to global nuclear treaties.

It sounds like a natural task for the United Nation's nuclear watchdog agency, but these recommendations are beyond the International Atomic Energy Agency's current reach, according to Deepti Choubey, Senior Director for Nuclear and Bio-security at NTI.

"The IAEA only has the authority to oversee materials in civilian programs and not the materials used for military purposes. As such, the IAEA does not have the mandate or the resources to oversee a comprehensive system covering all weapons-usable nuclear materials. So instead today we only have in place part of the system that we actually need to tackle this problem," said Choubey.

And the problem is a global one. According to Nunn, nuclear material that could be used in a nuclear weapon is spread over 32 countries. Much of it is poorly secured.

All 32 countries were extended an invitation to be briefed on NTI's findings. Iran and North Korea declined the briefing. Both were still offered an opportunity to validate the data gathered but chose not to do so.

"There is also greater know-how today to build a bomb, and there are terrorist organizations determined to get the material and build a weapon if they can," added Nunn. "It is clear that the elements of a perfect storm are gathering. There's a large supply of plutonium and highly enriched uranium and what we call weapons-usable nuclear materials."

And just like in "24," Nunn says the clock is ticking.

"We have a global challenge," said Nunn. "And we are in a race between cooperation and catastrophe."