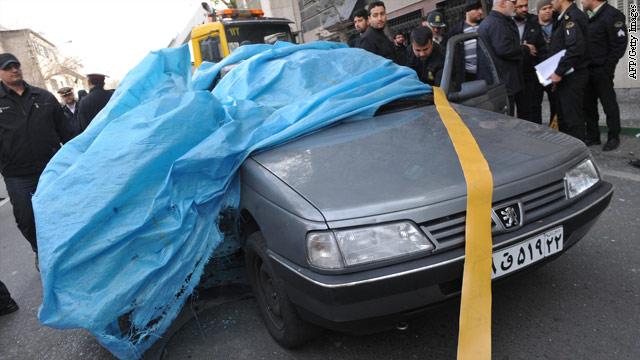 Iranian security forces inspect the site where a magnetic bomb attached to a car by a motorcyclist exploded outside a university in Tehran on January 11, 2012, killing a scientist and injuring two other people, according to Iranian news agencies.
January 11th, 2012
11:25 AM ET

Most dangerous job in the world?

A nuclear scientist was killed in a blast in a Tehran neighborhood Wednesday morning, an Iranian news agency reported, the latest in a string of attacks against such scientists that Iran has blamed on Israel.

State television channel Press TV reported later Wednesday that Roshan's driver, named as Reza Qashqaei, had died in a hospital from his injuries.

Roshan, 32, was a deputy director for commercial affairs at the Natanz uranium enrichment facility in Isfahan province and a graduate of Iran's Oil Industry University, according to the semi-official news agency Fars.

Natanz, which is said to have 8,000 centrifuges in operation, is one of two facilities that are enriching uranium in the country. This week, the United Nations' nuclear watchdog agency identified the second in the mountains of Qom province.

Officials in the United States and other Western nations have ratcheted up sanctions against Tehran since a November report by the International Atomic Energy Agency said the Iranian government was developing the technology needed to build a nuclear weapon. Last month, U.S. President Barack Obama announced sanctions against Iran's central bank.

Tehran maintains its nuclear program is for civilian energy purposes, disputing allegations by the United States and other countries that it is trying to develop a weapons program.

But the IAEA has said it cannot verify whether the intent of Tehran's nuclear program remains peaceful.

At the same time, relations between Iran and the United States have rarely been as strained as at present.

Iran has also ratcheted up tensions in the past month with its threat to close the strategically important Strait of Hormuz if Western nations carry through with sanctions on its oil industry to punish Tehran's lack of cooperation on its nuclear program. A spokeswoman for the U.S. 5th Fleet, based in Bahrain, responded that any disruption to the strait, which is a major corridor for oil tankers, would not be tolerated.

Responding to Wednesday's bombing, Iran's First Vice President Mohammad Reza Rahimi said the attacks against its scientists would not stop the country from achieving its scientific goals, IRNA reported.

"Iranian scientists become more determined to take steps in line with the aspirations of the Islamic Republic in spite of terrorist operations," Rahimi told the news agency.

The attack followed a similar mode of operation as others that have killed nuclear scientists in the capital city.

Iranian nuclear physicist Daryoush Rezaie, 35, was killed last July in front of his Tehran home by assailants on a motorcycle, Iranian media reported.

And on January 12, 2010, Iranian university professor and nuclear scientist Massoud Ali Mohammadi died in a blast when an assailant stuck a bomb under his car. Majid Jamali Fashi, an Iranian, reportedly confessed to the bombing and was sentenced to death in August, IRNA reported at the time.

Prosecutors accused him of working for Israel's spy agency Mossad and said he was paid $120,000 by Israel to carry out the hit, Fars news agency reported. Israel does not comment on such claims.

In November 2010, nuclear scientist Majid Shahriari was killed in a blast where, again, a bomb was stuck under a car by someone on a motorcycle.

"The bomb used in the (Wednesday) explosion was a magnetic bomb, the same kind that were used in previous assassinations of Iranian scientists. And the fact is that this is the work of the Zionists," Fars news agency quoted Tehran's Deputy Gov. Safarali Baratloo as saying.

Iran uses the term "Zionist" to refer to Israel. The nation has been engaged in a war of words with Israel, whom it accuses of trying to destabilize the republic.

Israel has not responded to Tehran's claims.

However, Mickey Segal, a former director of the Iranian department in the Israel Defense Forces' Intelligence Branch, told Israel Army Radio that Wednesday's attack was part of broader pressure being brought to bear on President Mahmoud Ahmadinejad's regime.

"Many bad things have been happening to Iran in the recent period. Iran is in a situation where pressure on it is mounting, and the latest assassination joins the pressure that the Iranian regime is facing," Segal said.

The Jerusalem Post reported Wednesday that the Israeli military chief of staff Benny Gantz, speaking at a Knesset Foreign Affairs and Defense Committee meeting, warned that "2012 will be a critical year in the connection between Iran gaining nuclear power, changes in leadership, continuing pressure from the international community and events that happen unnaturally."

Ali Ansari, a professor at the Institute for Iranian Studies at Scotland's University of St. Andrews, said more information is needed about the victims to help determine who's perpetrating the attacks.

Some have speculated that the victims were members of the opposition movement and could have been targeted by internal forces, Ansari said.

"But if it is true that Israel is behind it, Iran should make a formal complaint to the U.N. so they can get an answer from Israel," Ansari said. "Because if they really think some other country is killing their nuclear experts, why are they not giving them more protection?"

Attacks on nuclear scientists are not the only obstacle encountered by Iran's nuclear program.

A computer virus known as Stuxnet effectively set back Iran's nuclear program in 2009 and 2010 by launching a malware program that went undetected until damage to an Iranian nuclear facility had already been done. Who created Stuxnet remains a mystery, but many experts believe the virus is so sophisticated that it would have needed the resources of a nation state - or a combination of states - to produce it.

Nonetheless, the Atomic Energy Organization of Iran said in a statement Wednesday that its path was "irreversible and the useless actions of the U.S. and the criminal Israel will not cause the slightest disruption," according to Fars news agency.

The IAEA reported Monday that Iran was enriching uranium to 20% at the Fordo nuclear enrichment plant in the mountains of Qom province, described by IRNA as "a reinforced facility sunk deep under a mountain" 90 miles southwest of Tehran.

Iran says it has 3,000 centrifuges in operation at the Fordo plant and that its program has a medical purpose.