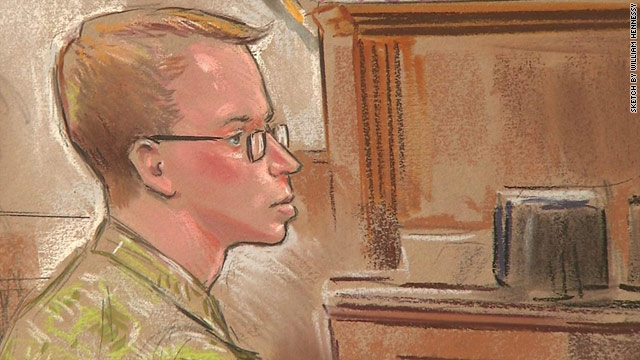 "They have overcharged" – Wiki-leaker hearing day 7

(Read also: Bradley Manning and the need to share)

238p update -"unfettered access" for the enemy
Pfc. Bradley Manning's attorney told the officer overseeing his case Thursday that the Army prosecutors have overcharged the young soldier, accused of the largest intelligence leak in American history.  (See the rest of our Bradley Manning coverage here)

"Provide the U.S. government with a reality check," David Coombs asked in his closing arguments. "Tell them, they have overcharged in this case."

But Capt. Ashden Fein, the lead prosecutor, said all the charges are justified and that Manning "gave the enemy of the United States unfettered access to" the classified documents he leaked.

Manning currently faces 22 charges and potentially a death sentence or life in prison without parole if convicted of all of them.

Coombs argued that the charge of "knowingly giving intelligence to the enemy" should be thrown out because there is no evidence that harm came from the leaks.

He said the U.S. government, beginning with former Pentagon Press Secretary Geoff Morrell, acted like "Chicken Little" yelling that "the sky is falling."

Shortly after Manning's arrest in 2010, Morrell told reporters at a Pentagon briefing "it appears that someone - if not multiple people - violated the trust and confidence bestowed on them by their country and leaked classified information; which not only is against the law but potentially endangers the well-being of our forces and potentially jeopardizes our operations."

Coombs also said all five charges connected to Manning's alleged altering government computers to download the documents he's accused of leaking should be tossed out.

Manning allegedly put unauthorized software on his computer. But Coombs said Manning's entire unit was very lax when it came to computer security or information assurance.

"It was a lawless unit when it comes to information assurance," Coombs said, in reference to testimony that all soldiers in the unit had added unauthorized software to their computers.

Coombs also argued that the 16 charges under the military law outlawing conduct "prejudicial to good order and discipline" should be reduced to just three charges.

If the investigating officer who oversaw the hearing, Lt. Col. Paul Almanza, were to follow Coombs request, Manning's maximum possible penalty, instead of life in prison or a possible death sentence, would be reduced to 30 years.

He argued Manning wasn't leaking information to the enemy but was letting Americans know what was going on in Iraq and Afghanistan.

"A hallmark of a democracy is the ability of government to be open with the public. Let's start that today," Coombs said. "Sunlight is the best disinfectant."

When Fein began presenting the prosecution closing argument he said Manning "abused our trust. Evidence in this case is overwhelming"

Fein went methodically through each charge, linking Manning or his computers to the leaked materials, or chats with Julian Assange, the founder of the Wikileaks website or Adrian Lamo, the convicted former hacker who acted as a confidential informant for Army investigators around the time of Manning's arrest.

For example, Fein cited chat logs that he said were of an online discussion between Manning and Assange discussing the upload 700 Guantanamo Bay detainee interrogation reports.

Manning said the upload had been going for about six hours and was about 36% complete. Assange asked how long until the upload would be complete, and Manning estimated about 11-12 more hours.

Near the end of the arguments, the prosecution presented a video from al Qaeda bragging that it had access to the WikiLeak documents, sometimes referring to WikiLeaks by name.

Fein said Manning repeatedly read and even downloaded and leaked an Army document that specifically spelled out how the enemy, including al Qaeda, used WikiLeaks to learn about U.S. tactics and procedures.

The prosecution also said Manning had seven times signed "non-disclosure" agreements spelling out that disclosing classified material is a violation of federal law.

Fein argued that each and every charge is justified saying, "Manning's absolute indifference" to rules regarding classified documents "brings discredit upon Armed Forces."

After the prosecution finished its closing arguments, Almanza ended the hearing, which stretched over the past seven days, including last weekend.

Almanza will now consider the testimony and evidence and make a recommendation as to whether Manning should face court martial and if so, on which charges.

The burden of proof at this level of the military justice system is "whether reasonable grounds exist to believe that the accused committed the offenses alleged."

The Special Court Martial Convening Authority, Col. Carl Coffman, has given Almanza until Jan. 16, 2012 to submit his recommendation. But if needed, Almanza can request more time.

The actual decision about whether Manning will face court martial rests with the General Court Martial Convening Authority, Maj. Gen. Michael Linnington, commander of the Military District of Washington.

The Article 32 hearing for Bradley Manning, accused of stealing and disseminating hundreds of thousands of documents, has finished. The investigating officer has until January 16th to provide his recommendations to the Court Martial Convening Authority.

“Manning gave enemies of the United States unfettered access to those documents,” said Capt. Ashton Fine, the lead prosecuting attorney, in his closing remarks. (See the rest of our Bradley Manning coverage here)

“You are in a unique position to provide the US government with a reality check,” Manning’s lawyer David Coombs told the investigating officer. “Tell them they have overcharged in this case.”