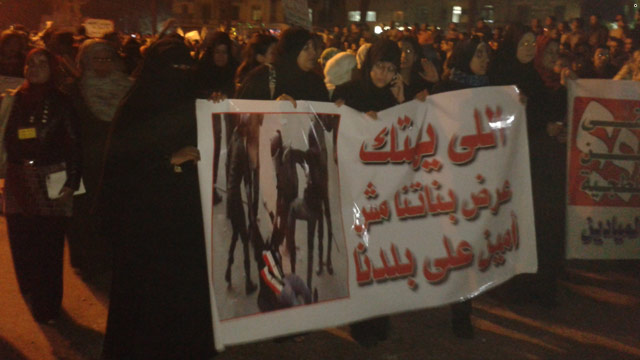 "We are going to speak out for the human rights of people around the world. We do not consider that interference," State Department spokesman, Victoria Nuland said at her afternoon briefing.

At the State Deparment Nuland repeatedly was questioned about comments from Egyptian Foreign Minister, Mohammed Kamel Amr, rejecting U.S. criticism and saying Egypt would not accept any interference in its affairs.

Secretary of State Hillary Clinton, in unusually strong and vivid language earlier in the week, had blasted Egyptian security forces for beating women, images that zipped around the world on social media sites.

"Recent events in Egypt have been particularly shocking," Secretary Clinton said Monday. "Women are being beaten and humiliated in the same streets where they risked their lives for the revolution only a few short months ago."

Clinton said the beatings were part of a deeply troubling patters that Egypotian women were shut out of decision making and specifically targeted by security forces and extremists.

"Women are being attacked, stripped, and beaten in the streets," Clinton said. "This systematic degradation of Egyptian women dishonors the revolution, disgraces the state and its uniform, and is not worthy of a great people."

Nuland said that Clinton had talked to the new Egyptian prime minister, Kamal al Ganzouri, by telephone on Tuesday and that the conversation had included the protests.

"She (Secretary Clinton) obviously said that she had been greatly concerned, and particularly concerned about the horrible images," Nuland said. "And he, you know, was very clear that the Egyptian authorities want to see their security forces operate within the rule of law."

Over at the Pentagon, a top spokesman expressed concern but stopped short of condemning the Egyptian military. The U.S. military has strong ties with their Egyptian counterparts, with the U.S. giving hundreds of millions of dollars in military assistance to the country and frequent training exchanges for Egyptian officers.

Top U.S. military officials had worked hard in the early days of the Egyptian uprising to reach out to their Egyptian counterparts and urge calm.

"You've seen the Egyptian military leaders come out and apologize for it. That's - that's an encouraging thing, and we certainly hope that they will, you know, investigate this and deal with it appropriately. That's the secretary's expectation," Kirby said.

But Kirby expressed confidence that the Egyptian military was continuing its promise to work towards handing over authority to a democratically elected government.

"The (Egyptian) military is working very hard towards a transition to a civilian government. At the same time, they are trying to secure their country," Kirby said. "I'm not making excuses for it, not at all. It's unacceptable behavior."

Also Wednesday the Egyptian military forces said people responsible for the beatings would be held accountable.

"The Supreme Council express its great regret to the great women of Egypt for the violations that took place during the recent events, in the demonstrations that took place at the parliament and the ministers' council, and reassure its respect and appreciation for Egyptian women and their right in protesting and their active positive participation in the political life," the Supreme Council of the Armed Forces said in a statement on Facebook.