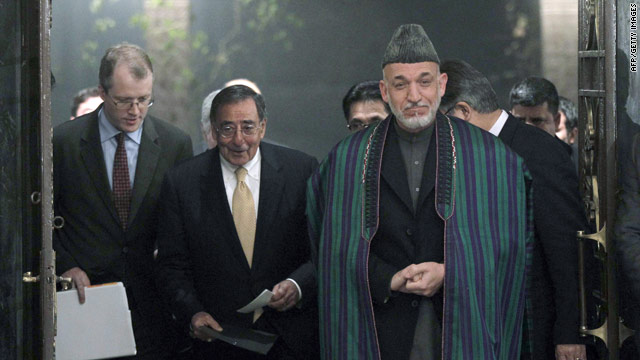 Karzai: Leave us out of your Iran mess

When it comes to the fight between the United States and Iran over the downed U.S. drone, keep Afghanistan out of it.

Afghan President Hamid Karzai said Wednesday that his country, which shares a border and, as he put it, "deep cultural, linguistic and religious links" with Iran, does not want to be put in the middle of the dispute.  The unmanned stealth aircraft that crashed in Iran recently flew from a base in Afghanistan. The drone was on a CIA mission when operators lost control of it.

Karzai, speaking along with U.S. Defense Secretary Leon Panetta at a news conference after the two met in Kabul, claimed ignorance about the mission.

"Afghanistan was not aware that the drone had gone or malfunctioned in Iran," Karzai said, responding to a question from a reporter.

He said the Iranians sent a note about the incident to the Afghan Ministry of Foreign Affairs and is following up with the U.S. government. But, Karzai said politely, keep us out of it.

"So Afghanistan would not want to be involved in any - how should I put it, not antagonism, adversarial relations between Iran and the United States. Afghanistan wishes that they be friends and Afghanistan's sovereignty and territorial integrity and soil is not used one against the other," Karzai said.

Panetta, while refusing to discuss the drone mission, suggested that missions into Iran were necessary and will continue.

"Part and parcel of the effort to not only protect Afghanistan but protect the United States is to obtain important intelligence that allows us to protect our people and protect ours," Panetta said.

On Tuesday, in an interview with Fox News, Panetta said Karzai had not complained that the revelation of the spy mission put Afghanistan in an awkward position