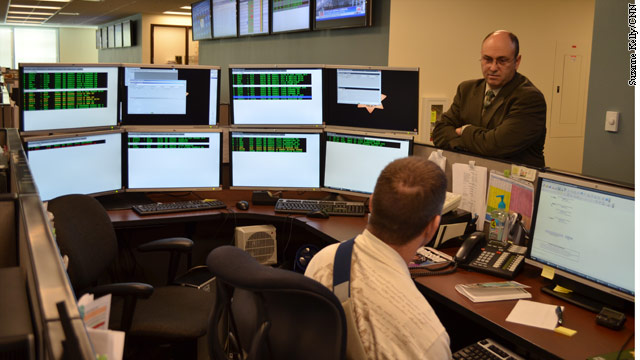 The idea: housing all of these agencies under one roof will speed up communication and help spot criminal or terrorist activity more quickly, possibly even preventing a terrorist attack from occurring. It's a very different job from the one Monahan had tracking down murderers. Predicting wasn't so much part of that business. It turns out that following a chain of evidence to one single truth is a lot different than following several possible chains and predicting what might or might not happen.

"If we wait until it happens, we'll have a beautiful unbroken chain of evidence that will lead to a prosecution and conviction, however, thousands of people are dead," Monahan said. "What we're trying to do is derive information that will lead to intelligence, that will lead to multiple possible truths, and then we provide policy advice to those decision-makers so they can make informed decisions with the idea of preventing it from happening in the first place."

Las Vegas is used to rolling out the red carpet for visitors. But averting terrorism poses a unique challenge for law enforcement.

"Think about it. Hospitality means all welcoming. Security means access denial. They are incompatible and it's a constant fight," Monahan said.

In 2008, something happened a world away that proved a game changer for counterterrorism experts. Terrorists in Mumbai, India, stormed a series of hotels, including the famous Taj Mahal hotel. They killed hostages, threw grenades and set fire to the buildings in an effort to cause as much damage as possible. One hundred and sixty people were killed, and the attack hit home in Las Vegas, a city that boasts 17 of the world's 20 largest hotels.

"We were watching it very closely," Monahan said. He eventually traveled to Mumbai with colleagues from the Los Angeles Police Department to try to reconstruct what happened and talk to officials about ways of preventing a similar attack. "If you think of the ease of a Mumbai-style attack using lightly armed and well-trained actors, that is highly likely."

Monahan was shocked when he learned that as many of the attack victims in Mumbai died from the fires that were set as from gunfire or grenades. That's because the firefighters didn't enter the buildings while the gunmen were still on the loose.

Monahan came back to Las Vegas and talked with local fire officials about the dilemma. What they told him wasn't comforting. "They said yes, we're not gonna go inside if there is a gunfight inside."

The issue still hasn't been resolved to Monahan's satisfaction. "You've got an enemy that is looking at Mumbai and saying this is a lesson learned but they say we gotta repeat this, and three years later we haven't made the necessary corrections."

It's lessons like Mumbai that drive home just how local the terror threat has become. Prior to 9/11, terrorism was something that largely existed elsewhere. It was the FBI's job or the CIA's job to stop attacks. But today, with more terrorists of the "homegrown" variety, law enforcement is depending more on the local effort, one of the reasons why Monahan has made it a point to train hotel employees to spot signs of terrorism.

The valets, housekeepers and doormen that turn up for work every day now form a critical information gathering network. It was yet another lesson that came out of studying attacks overseas, like one carried out in 2009 in Indonesia, where explosives were detonated in two hotels and an unexploded device and explosive material was found in a room at a third hotel.

"It was the Marriott in Jakarta where they found a bomb-making factory in one of the hotel rooms. A housekeeper is gonna see that first," Monahan said.

The fusion center now produces a series of DVDs that are distributed to all of the hotels in the region, instructing employees on what to look for and how to report what they see. It's a critical source of information and intelligence that the federal agencies just can't provide.

"They don't have the roots in a community like we do. I've been here 27 years. The security directors in the hotel casinos are the guys that I worked with on the graveyard shift 25 years ago, so we've known each other for that long and we've built trust and rapport," Monahan said. "Terrorism is a local law enforcement problem now."

Leave a Reply to Jim-Fed in DC