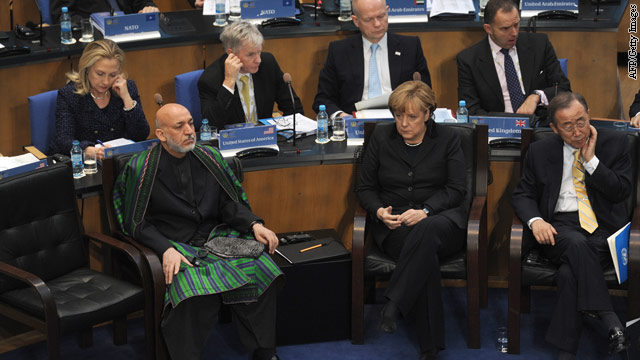 Pakistan did not take part.

German Foreign Minister Guido Westerwelle said it was "regrettable" that Pakistan was not represented. "Pakistan told me this weekend that it wished to see this conference a success," he said.

Afghan Foreign Minister Zalmai Rassoul also expressed "regret" about Pakistan's decision, and said, "I'm sure that our friends in Pakistan would be happy to see an Afghanistan which is driving toward a peaceful, stable, and democratic country."

Pakistan said it boycotted the conference to send a message.

Speaking to Pakistan TV, Basit cited recent NATO airstrikes on two posts near the Pakistan-Afghanistan border that killed 24 Pakistani soldiers. The incident made it "impossible for Pakistan to take part" in the conference, the Associated Press of Pakistan report said.

Bonn hosted a similar summit 10 years ago, after a U.S.-led war toppled the Taliban government of Afghanistan.

Karzai, at the meeting Monday, asked NATO to remain committed to Afghanistan after the pullout of foreign combat troops in 2014.

"Your continued solidarity, your commitment and support will be crucial so that we can consolidate our gains and continue to address the challenges that remain," he said.

"We will need your steadfast support for at least another decade," Karzai said. "We will need training for our own troops. We will need equipment for the army and police and help to set up state institutions."

Afghanistan also pledged to step up its fight against corruption.

Critics worldwide have assailed Karzai as being a part of the corruption in Afghanistan.

U.S. Secretary of State Hillary Clinton, representing the U.S. government at the conference, vowed that the United States is "prepared to stand with the Afghan people for the long haul."

"We have no illusions about the enormous obstacles that remain ahead in Afghanistan," Clinton said, according to prepared remarks.

She warned that the international community has "much to lose if the country again becomes a source of terrorism and instability."

Clinton expressed concern that Pakistan had not sent a representative to Bonn, saying it is "imperative" that all of Afghanistan's neighbors support the reconciliation process with the Taliban and other insurgents.

"We could, of course, have benefited from Pakistan's contribution to this conference," she said.

Clinton later added, "We expect Pakistan will be (a) partner going forward and we expect them to continue to play a constructive role."

She said the entire international community has responsibilities to shore up Afghanistan, including the Afghans themselves, who have "more work to do to strengthen their democratic institutions."

She acknowledged that this is a difficult time to be asking for more money for Afghanistan. "Many countries here in this hall understand that the international community faces new fiscal constraints," she said.

But she announced the United States will join other partners in resuming financial disbursements to the Afghan Reconstruction Trust Fund, after suspending them when the International Monetary Fund halted its own programs over concerns about it. The fund is administered by the World Bank.

Iran, meanwhile, used the conference to speak out against troops from the United States and other Western nations keeping any kind of long-term military presence in Afghanistan.

"Certain Western countries seek to extend their military presence in Afghanistan beyond 2014 by maintaining their military bases there. We deem such an approach to be contradictory to efforts to sustain stability and security in Afghanistan," Iranian Foreign Minister Ali Akbar Salehi said.

The original Bonn conference in 2001 consisted of U.N. representatives facilitating the meeting of a group of Afghan exiles and leaders.

But this time, members of 85 delegations from various countries and 15 international organizations joined Afghans in the discussions.

Their goal is to take stock of accomplishments over the past decade and assess continued challenges in Afghanistan, as well as to plot a partnership with the Kabul government amid plans to withdraw all foreign combat troops from the country by 2014.

In recent years, Afghanistan's economy has grown, albeit it at a slow rate.

The country has moved away from the repressive extremist rule of the Taliban and toward a more democratic political system in which Afghans vote for their leaders.

And the status of women - strictly controlled under the Taliban - has improved with a constitutional commitment guaranteeing equality. Three million girls are now in school.

Foreign Minister Rassoul, speaking to reporters at the end of the conference, said the Afghan government is "very satisfied with the outcome," and was glad to hear from other countries a "commitment of strong support and assistance" during a transformative decade ahead.

"The Bonn conference also has given us an opportunity to look back at our history-making achievement in the past decade," he said. "At no other point of our history have the Afghan people enjoyed better access to education and health care or seen expansion of the political right, including those of Afghan women.."

Clinton, who has pushed for women's rights worldwide for decades, also praised progress for women in the country.

"Women and civil society have achieved considerable progress over the last 10 years, and we don't want anything that we agree to or do to undermine that progress or to turn the clock back on human rights for women and men," she said in prepared remarks.