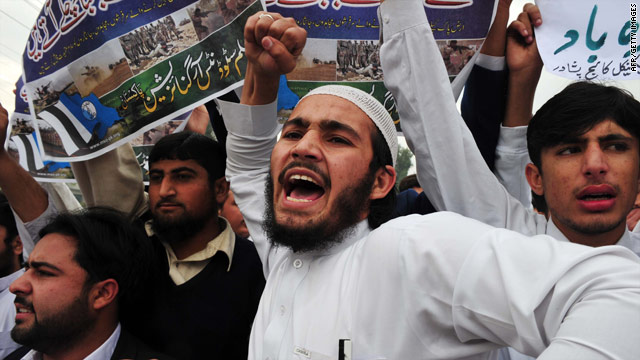 While Secretary of State Hillary Clinton and Defense Secretary Leon Panetta have called the incident a "tragedy" and offered condolences, the U.S. government has not gone as far as to offer a formal apology. Some in the State Department believe a show of remorse is necessary to help save the relationship with Pakistan, already badly damaged over the U.S. raid into Pakistan to kill al Qaeda leader Osama bin Laden, from completely unraveling. But the White House has balked.

Details of the deadly raid early Saturday remain unclear. A NATO official said Afghan troops were working with elements of U.S. Special Operations forces in a combined mission on the Afghan side of the border.

Gen. James Mattis, the chief of U.S. forces in the region, named an Air Force general from the military's Special Operations Command to lead an investigation. Brig. Gen. Stephen Clark is expected to report back to Mattis by December 23. American officials with direct knowledge of initial reporting on the incident say Clark's probe is focusing on what coordination failures occurred before the airstrike.

But in the meantime, ties between Washington and Islamabad continue to sour, with Pakistani Prime Minister Yousuf Raza Gilani telling CNN in an interview that Pakistan is re-evaluating its relationship with the United States in light of the airstrike.

U.S. Ambassador Cameron Munter has made the case to Washington that the Pakistanis are very traumatized by what happened and are waiting for an official U.S. response, according to senior US officials familiar with interagency discussions on the incident.

The White House and military leaders have said they would wait for the results of the the official investigation before any further official response is made.

White House Press Secretary Jay Carney noted that the White House offered condolences on behalf of President Barack Obama, the administration and the American people "for the tragic loss of life."

"And we have launched an investigation through CENTCOM (U.S. Central Command) as well as ISAF (International Security Assistance Force) to find out exactly what transpired," he said. "There was obviously no apology."

He derided as "utter nonsense" a New York Times report that Obama's bid for re-election was a factor in the decision not to apologize to Pakistan.

Pakistan has been a vital land supply route into Afghanistan for the United States and its allies, and a key partner in the battle against al Qaeda and its aligned jihadist movements. The State Department insists the fallout with Pakistan over the incident has not disrupted the war effort, and that working level discussions and cooperations continue.

But some U.S. officials worry that the window is closing to respond to the incident Pakistan's military and intelligence cooperation begins to slow down. The incident, which NATO called a "tragic, unintended" event, has already compelled Pakistani authorities to turn back 300 trucks carrying NATO supplies and fuel into Afghanistan on Monday and order the United States to vacate the Shamsi air base.

Pakistan has also decided to boycott an upcoming conference on the future of Afghanistan. The Monday conference in Bonn, Germany, is being billed as a chance to start a reconciliation process in Afghanistan, an issue in which Pakistan has consistently maintained it should play a major role.