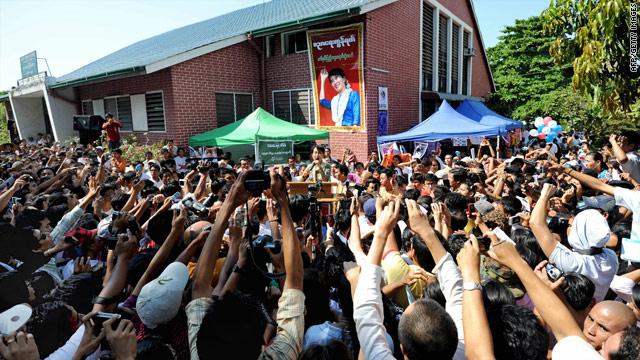 Suu Kyi is a bit of an enigma. She is known worldwide for her efforts to bring democracy to Myanmar, also known as Burma, but few people have had the opportunity to hear her speak at any great length over year years.

Since her release last November, her public comments have illustrated the tightrope she is walking - balancing between encouraging the government's efforts to open up the political space in the country and speaking out about the about the need for further reform.  Amid this, she also has begun a remarkably robust dialogue with the government.

For more than an hour Wednesday, Suu Kyi held forth on a webcast with members of the Council on Foreign Relations, discussing a broad array of issues related to Myanmar, from engagement with the United States to her own political future in the country.

Suu Kyi said she genuinely believes there are people in the government and military "who want what is best for the country," and said it is important to take note of the reforms the government has made.   She spoke at length about how the media in Myanmar have more room to operate than they have in the past two decades and have increased in numbers ,as has access to the Internet .  The government has also, she said, been more liberal about political participation and allowing the use of political terms, once considered unthinkable.

Suu Kyi said she supports increased American engagement with Myanmar's government in the hope this will encourage greater reform. She hopes Clinton's visit will open the way to a better relationship between the United States and Myanmar.

But neither Suu Kyi nor Clinton are naive about the challenges ahead.

While the government of the new president, Thein Sein, has allowed more reform than any Burmese government in at least two decades, Myanmar is far from a democracy.

Journalists in country do enjoy some new freedoms, but the press is still heavily regulated and foreign journalists still face difficulties getting a visa to travel there, although in recent months more have been allowed in.

Suspected cooperation between the government and North Korea on ballistic missiles and nuclear activity is also troubling to the United States.

One of the things Suu Kyi said is most pressing is establishing rule of law, including an independent judiciary.  That's even more important than releasing the country's political prisoners, she pointed out, because even if the prisoners were released tomorrow they could still be rearrested if there is no rule of law in the country.

She also emphasized the need for the government to do more for Myanmar's ethnic nationalities.

Right now she is focused on using the opportunities that have arisen over the past few months to engage more with the people of her country.

No date has been set for the promised parliamentary elections, but she said she will "run for the elections when they take place."

Her NLD party was planning to boycott the vote, but is reregistering after some regulations that would have prevented Suu Kyi from running were changed. Her platform, she said, will focus on rule of law, ethnic harmony and amendments to the constitution.

While she said there are no guarantees in politics, this politician said she is cautiously optimistic that democracy will come to Myanmar.

One thing that she said is encouraging is that more young people are engaged in politics. In 2002, she said, people felt it was a "dangerous game," and did not want to be involved. But it is different now.

She credited social media in part, saying young people in the nation can use the Internet to link up with others around the world and inside Myanmar, and they are better informed than before.

She said she'd love to be on Facebook and be "tweeting away," but she hasn't had the time.