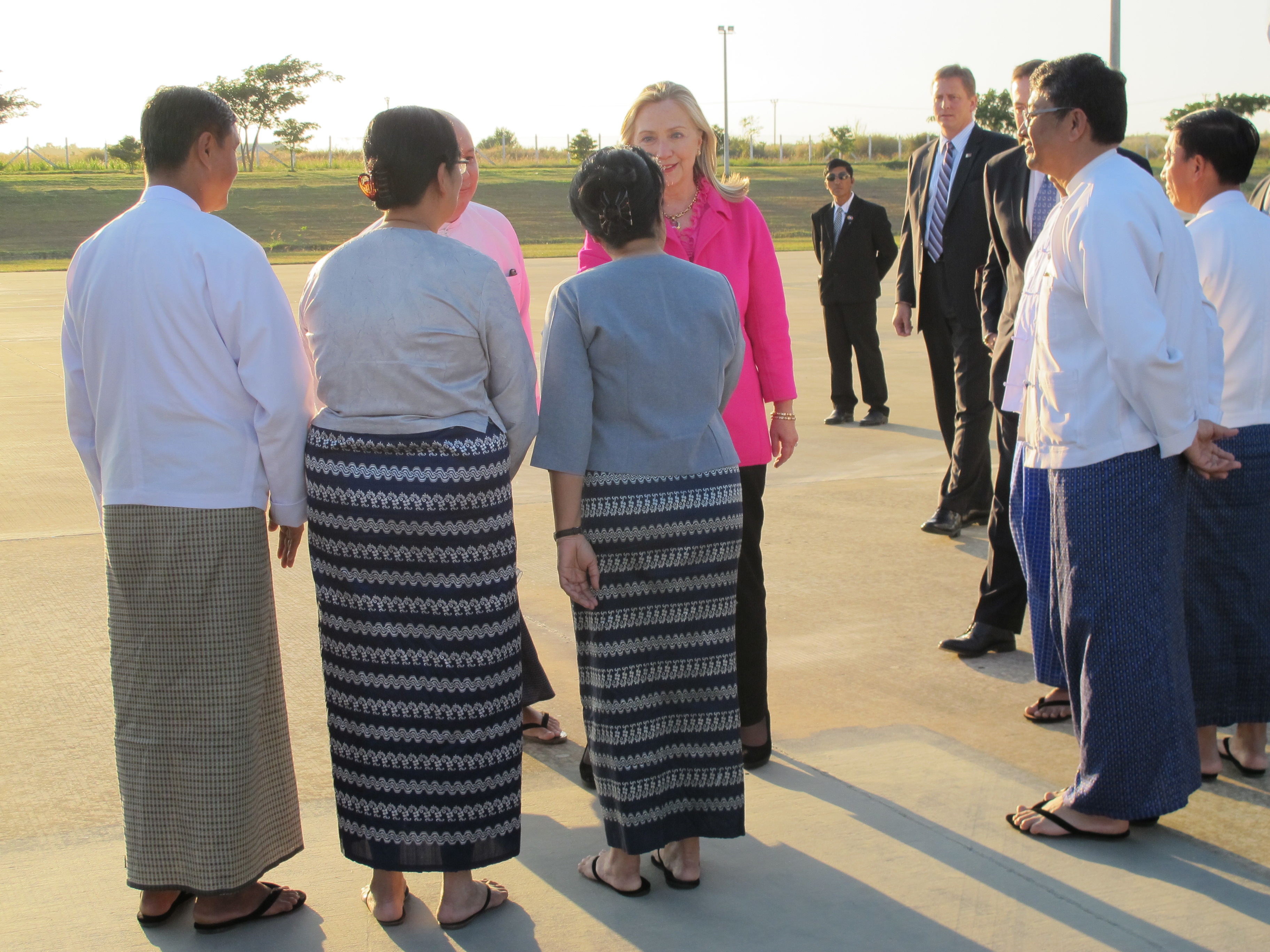 "After years of darkness, we've seen flickers of progress," President Barack Obama said November 18 as he announced that Secretary of State Hillary Clinton would be traveling to Myanmar.

Obama points to an emerging dialogue between the government and one of the world's most famous pro-democracy supporters, Aung San Suu Kyi. Winner of the Nobel Peace Prize in 1991, Suu Kyi was held for most of the past two decades under detention. She was released from house arrest November 13, 2010.

It's fair to say the Clinton trip would not be happening if Suu Kyi had not confirmed that she supports American engagement with Myanmar's leaders. Before announcing the Clinton trip, the president spoke directly with Suu Kyi by phone from Air Force One while he was in Southeast Asia and was assured that is her view.

The president also noted the release of some 200 political prisoners, relaxation of media restrictions and new legislation that could open up the political environment.

But, Obama said, there is far more to be done. Clinton said it's time to "test...changing attitudes."

The Obama administration still is concerned, officials say, about Myanmar's closed political system, its treatment of minorities and holding of other political prisoners. Clinton said the United States wants more political prisoners released, a "real" political process and "real" elections, an end to conflicts with ethnic minorities that have displaced tens of thousands of the country's residents.

The administration, however, is not ending sanctions and is not making any abrupt changes in policy. In an interview with CNN's Brianna Keilar, Clinton said "One of the reasons I'm going is to test what the true intentions are and whether there is a commitment to both economic and political reform."

U.S. officials say the Obama administration began reviewing its policy on Myanmar in 2009 when it came into office. It began talking with major players in the region, including China, and with European leaders. A key conclusion among the countries was that the policy of stringent economic sanctions was not yielding results for the strategy the administration wanted to follow. So began what the administration refers to as "parallel engagement," talking with the regime while, at the same time, talking with Aung San Suu Kyi.

Why would the regime apparently be open to change? A senior administration official who briefed reporters on background because of the diplomatic sensitivity of the issue, says that as Myanmar's leadership traveled around Southeast Asia and other parts of the world they "saw that Burma is falling further and further behind."

One telling detail, the official said, is that when a senior team of Myanmar officials was in Washington none of them were carrying Blackberries or almost any other kind of Internet device "because there's very little service inside the country (Myanmar)."

The secretary of state begins her visit in the new capital, Naypyidaw, where she will meet with the president, Thein Sein, and the minister of foreign affairs, Wunna Maung Lwin. In Yangon she will meet Aung San Suu Kyi. The two have spoken by phone but this will be their first person-to-person encounter. Clinton also is scheduled to meet with representatives of ethnic minorities.

"This is about whether they are on a path to democracy," Clinton told a reporter recently. She and other Obama administration officials stress this is a fact-finding mission.

"If Burma fails to move down the path of reform," Obama said, "it will continue to face sanctions and isolation. But if it seizes this moment, then reconciliation can prevail, and millions of people may get the chance to live with a greater measure of freedom, prosperity and dignity. And that possibility is too important to ignore."