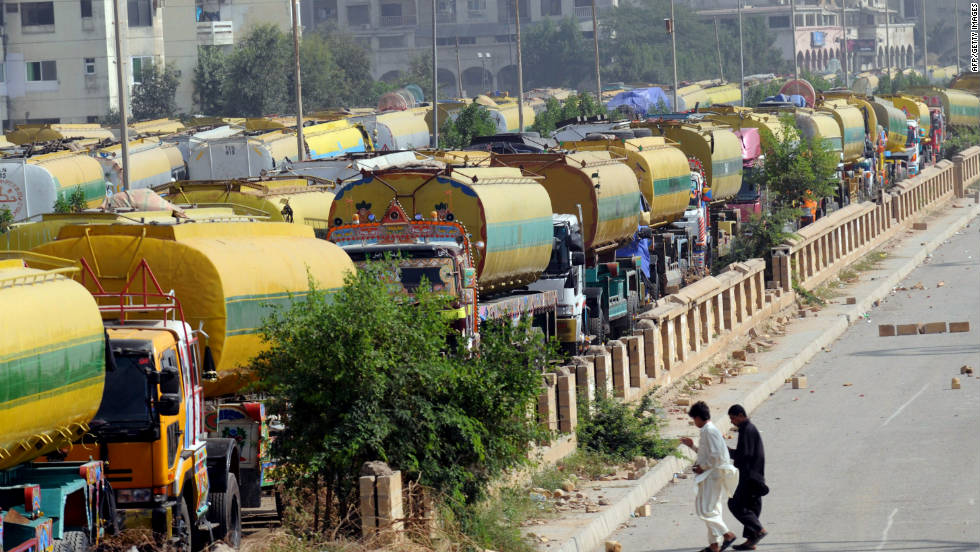 The scene in Karachi this week as supplies are backed up after Pakistani authorities shut down vital supply routes.
November 29th, 2011
01:01 PM ET

To Afghanistan, on the slow train

Call it the ultimate in military logistics.

As land routes from Pakistan into Afghanistan are cut, sabotaged or otherwise interrupted, the U.S. military has developed alternative railroad routes that make the Orient Express look like a branch line. They are called - rather prosaically - the Northern Distribution Network, or NDN.

The main route begins at the port of Riga in Latvia, from where freight trains roll across Russia, and continues along the edge of the Caspian Sea. It crosses the deserts of Kazakhstan and into Uzbekistan. About 10 days after beginning their odyssey, the containers cross into Afghanistan, carrying everything from computers and socks to toilet paper and bottled water. Other routes begin at the port of Ponti in Georgia on the Black Sea and at Vladivostok in the Russian Far East.

The Russians first offered transit for nonlethal equipment bound for Afghanistan in 2008. According to diplomatic cables released by WikiLeaks, it took nearly a year for the U.S. and NATO to negotiate transit rights with central Asian governments such as Uzbekistan, although two-thirds of jet aviation fuel bound for Afghanistan was already transiting Uzbekistan.

Mistaken air attack under investigation No more 'business as usual' with U.S. The first shipment of supplies crossed Russia in May 2009; just in time, because the "surge" meant that even more U.S. troops needed resupplying, and transit routes through Pakistan were about to become a pawn in the deteriorating relationship between the two countries. Read the full post