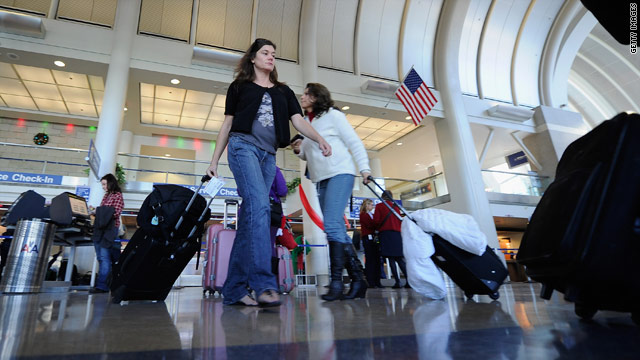 Feds: Holidays could tempt terrorists - but U.S. 'not aware of credible threats'

Terrorists could decide to launch attacks during the holiday season but the United States has no evidence any plots are being planned, according to a federal law enforcement intelligence bulletin issued Wednesday.

The Department of Homeland Security and FBI joint notice to local law enforcement partners says federal officials "are not aware of any credible threats to the Homeland specifically timed to coincide with the 2011 holiday season. " CNN obtained a copy of the document, which goes on to say intelligence received in the last year suggests "terrorists recognize that the large gatherings occurring during the holiday season provide an opportunity for mass casualty attacks."

During the May raid that killed Osama bin Laden, information was retrieved saying that as recently as February of 2010 al Qaeda was considering the merits of launching U.S. attacks on holidays such as Christmas. But officials don't know if that idea was broadly shared with al Qaeda foot soldiers and, if so, whether they were receptive to the idea. Some al Qaeda affiliates were reported to be more interested in launching attacks in their local regions and less inclined to attack the U.S.

The bulletin reminds law enforcement officers the U.S. stopped an alleged plot last year to set off a vehicle bomb at a Christmas tree lighting in Portland, Oregon. Mohamed Osman Mohamud goes on trial next year and has pleaded not guilty to attempting to use a weapon of mass destruction. The DHS/FBI intelligence document says the Oregon incident is the first known plot by an alleged "homegrown violent extremist" that was planned to take place at a U.S. holiday event.

President Barack Obama and other officials have repeatedly said they are extremely concerned about so-called lone wolf offenders because their plots don't involve co-conspirators and are therefore extremely difficult to detect and stop. "We remain concerned that violent extremists could seek to conduct small-scale attacks during this year's holiday season," according to the DHS/FBI bulletin.

Officials warn that past al Qaeda propaganda has encouraged individuals to carry out terror strikes in their home countries involving simple improvised explosive devices or small arms. The intelligence document says such attacks "would not require overseas travel for training or communication with known terrorists."

The document advises local law enforcement to be vigilant and watch out for certain types of activity such as people buying commonly available chemicals that could be used to make bombs, or conducting surveillance of possible targets.

Federal authorities have issued warnings in the past about possible terrorist activity at holiday time. This year marks the first Thanksgiving and Christmas season since the death of bin Laden.