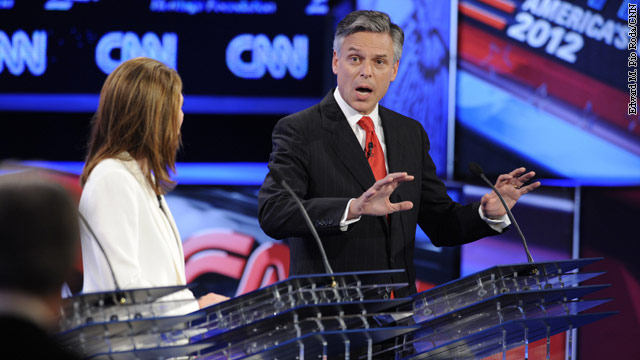 Huntsman's claim of Taliban defeat is not reality

"We have dismantled the Taliban, we've run them out of Kabul," the former Utah governor said when explaining why he believes the United States should have a much smaller troop presence in Afghanistan than the almost 100,000 troops there now. "We need a presence on the ground that is more akin to 10-to-15,000 that will help with intelligence gathering and special forces responsibility."

But the Taliban continues to be a threat, and attacks orchestrated by the group continue month after month in-country.

- A string of bloody attacks launched earlier this month were blamed on the Taliban. Eleven people died after a roadside bomb exploded in the northwestern Afghanistan province of Badghis. Another seven civilians were killed and 17 wounded during a Taliban suicide attack at a mosque in the Jirqishlaq Hasan Tal area of Baghlan province. And six members of the Afghan security forces were hurt after a suspected Taliban suicide bomber blew himself up in the vicinity of Pul-e Khumri in Baghlan.

- In October 10 people were killed in a suicide bombing outside a U.N. compound in Kandahar, Afghanistan. Officials linked the bombing to the Taliban.

- And in September three high-profile attacks - one against the CIA compound in Kabul, a second against the U.S. embassy and NATO headquarters in the capital city, and still another when a suicide bomber killed the lead negotiator in the Taliban peace process - were tied to the Haqqani network that is closely allied with the Taliban.

Progress has, however, been made against the extremist group that ruled Afghanistan before the United States overthrew them, according to commanders in the field.

"We have reliable information showing that large numbers of Taliban and insurgent leaders are choosing to phone in their operational orders from Pakistan, abandoning their own foot soldiers, who are left behind to conduct the fighting," said the commander of the International Security Assistance Force, Gen. John Allen, after the recent Taliban attacks this month. "The leaders have fled, forced out by the overwhelming ability of Afghan and coalition forces.”

But even though the Taliban is weakened, the ability of insurgents to hide across the border in Pakistan continues to be a great threat to success in Afghanistan, according to the latest Pentagon evaluation of the war.

"The insurgency's safe havens in Pakistan, as well as the limited capacity of the Afghan Government, remain the biggest risks to the process of turning security gains into a durable, stable Afghanistan," according to the "Report on Progress Towards Security and Stability in Afghanistan," a Congressionally mandated evaluation of the war's progress that the Pentagon provides twice a year.