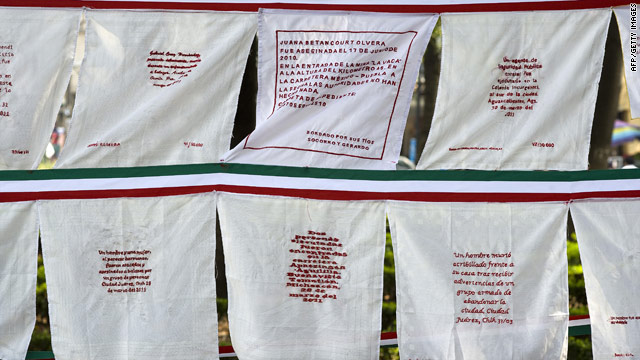 Outgoing President Felipe Calderon launched a frontal offensive against criminal syndicates five years ago, enlisting the military alongside outgunned civilian police.  Although the vast majority of the 35,000 deaths in recent years are the result of criminal turf wars, most innocent Mexicans are beleaguered by insecurity and violence.  Many Mexicans wonder why they are paying such a high price to fight the illicit drug trade that services the insatiable demand for drugs in the United States – particularly when U.S. policy makers appear either indifferent or worse to their plight.

Republicans who were among the most enthusiastic backers of “Plan Colombia,” which channeled about $5 billion in U.S. aid to help that South American nation get the upper hand on narco-terrorist guerrilla groups.  A decade later, cocaine cultivation and criminality have declined dramatically in Colombia.  The Republicans who helped forge that successful strategy have been absent when it comes to backing Mexico’s unprecedented efforts to deal with drug corruption.

Indeed, conservative commentators tend to conflate concerns over illegal immigration with the drug violence issue.  Rather than crediting the Mexican government for having the courage to end de facto truces with drug gangs, some observers have heaped scorn on corruption in Mexico and spoken of closing the border – as if a quarantine were need to protect Americans from this lawlessness.

Nonsense.  According to the U.S. Justice Department, drug trafficking organizations of Mexico constitute the largest organized crime threat in the United States. So Calderon, his military, his cops, and his people are literally fighting the same beast that menaces U.S. communities.  However, far from treating Mexico as an ally, the political class in the United States ignores or impugns the sacrifice our southern neighbor is making.

Two leading Mexican presidential candidates have given hints recently about what they might do regarding the “drug war.”  Enrique Peña Nieto of the center-left Institutional Revolutionary Party (PRI), which governed Mexico for seven decades until losing power in 2000, told an audience at Washington’s Woodrow Wilson Institute that he would learn from Calderon’s strategy and deploy “a much more focused and effective public security strategy.”  Although Peña Nieto affirmed Calderon’s use of the military as “correct and appropriate,” he also said the army should be replaced gradually by civilian police in carrying out the anti-drug mission.  Leftist candidate Andres Manuel Lopez Obrador was more specific, pledging that the military would return to their bases within six months under his presidency.

Although these opposition candidates were relatively cautious in their commentary about Calderon’s unpopular strategy, many wonder whether any successor would prosecute this anti-drug offensive with the same intensity.  Mexico might be more likely to do so if it could count on greater material and moral support from the United States – both Republicans and Democrats.

Republicans have some catching up to do.  Florida’s junior senator Marco Rubio seems to understand this, judging from his comments at a televised Politico interview last week. “Mexico deserves better. Mexico has all the conditions necessary to be prosperous and to provide great opportunities for its people," Rubio said.  “In order for us to have the moral standing on this issue, we have to do a better job” of dealing with U.S. drug consumption.

Senator Rubio, whom many consider a front-runner in the GOP’s vice-presidential sweepstakes despite his disinterest in the post, spoke with characteristic vision about U.S.-Mexican relations.

"One of the great developments of this 21st Century will be if Mexico can emerge from this and really grow economically.  Imagine the United States bordered by Mexico in the south and Canada in the north – two free and prosperous nations – and what it would be mean for us as a nation and as a people.  I think that is what the Mexican people want, and I think we should be helping them in that regard in any way we can," Rubio said.

We will see in the days and weeks ahead if any Republican presidential candidate can summon up the courage to speak with common sense about Mexico, or about anything else.

Roger F. Noriega is a former assistant secretary of state for Western Hemisphere affairs (Canada, Latin America, and the Caribbean) and a former U.S. ambassador to the Organization of American States. He coordinates the American Enterprise Institute’s (AEI) program on Latin America and writes for the Institute's Latin American Outlook series.