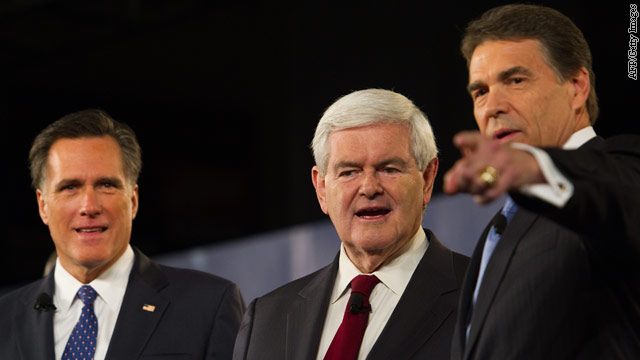 With Congress aiming for trillions of dollars in budget cuts, former secretaries of state from Republican and Democratic administrations are asking lawmakers to leave international aid, a prime target for slicing, intact.

"We recognize the gravity of America's fiscal situation and that all programs must contribute their fair share to reducing our nation's debt," five former secretaries wrote in a letter to Congress. "Yet, the International Affairs Budget - only 1.4% of the federal budget - already received deep and disproportionate cuts this year."

The additional cuts could add up to the biggest since the end of the Cold War, they wrote.

U.S. foreign assistance was a hot topic at Saturday's GOP debate, with Texas Gov. Rick Perry saying he would initially cut U.S. assistance to "zero," and then assess how much aid the United States would extend on a country-by-country basis, with friendlier countries more in line with U.S. interests likely to receive a greater proportion.

He was especially critical of Pakistan in his remarks, saying that nation does not "deserve our foreign aid ... because they're not being honest with us."

"The issue isn't starting at zero, but where you end," retired Adm. James Loy of the U.S. Global Leadership Coalition said in a statement after the debate. "When used strategically, foreign assistance advances our national security. And retreat in today's world is not an option."

Former Massachusetts Gov. Mitt Romney has also been critical of U.S. foreign assistance, particularly when it comes to China, saying the country needs to be a more responsible stakeholder in the international system.

"This galls me: We give 10 million dollars in foreign aid a year to China. Its not that they're bad people, but the idea that a nation that is as large and robust and economically viable as theirs is getting money from us just makes no sense at all," he said in Exeter, New Hampshire, earlier this month. "I would stop sending money to countries that can take care of themselves."

With its economy growing at a breakneck pace annually, China is better positioned than it has been in the past to extend aid to other countries. Some analysts say such a development should be greeted with a dose of measured caution.

"There is a point that you don't want too much of China's assistance in place of our own or European or other, Japanese assistance, because China tends to benefit its own contractors with its assistance," Douglas Paal with the Carnegie Endowment for International Peace told CNN. China "does deals where they provide infrastructure construction and exchange for commodities, and these are non-market transactions, often not transparent transactions, and this is not the sort of thing - I hope its not the sort of thing - that Gov. Romney had in mind," he said.

In reality, foreign assistance takes up a very small portion of the federal budget. Of the $3 trillion budget appropriated for the 2011 fiscal year, only $50 billion was for the State Department budget, according to Russell Rumbaugh of the non-partisan Henry L. Stimson Center. In addition to foreign assistance to other countries, that figure also includes appropriations for the entire institutional framework for conducting diplomacy, Rumbaugh said, including the money to fund the operation of U.S. embassies around the world.

The amount of foreign aid included in the federal budget is so small, Rumbaugh said, "a 10% increase or decrease is not going to change its share of the budget."

With the combat mission in Iraq ending next month, along with an expected end to the combat mission in Afghanistan in 2014, a worrisome report from the United Nations last week on Iran's nuclear ambitions, and the Arab Spring still unfolding, the former secretaries told members of Congress that it is more vital than ever for the United States to be able to use all of the diplomatic tools at its disposal.

With a November 23 deadline looming, a congressional "super committee" - made up of six members of the House and six members of the Senate - must come to agreement on $1.2 trillion in discretionary savings from the federal budget over a 10-year period. Foreign assistance funding is part of a broad cross-section of the budget under the threat of additional automatic cuts if the committee doe not reach an agreement.

"This is the one area where leaders of both parties can find common ground and come together to ensure a better, safer world and a more prosperous future," the former secretaries wrote.