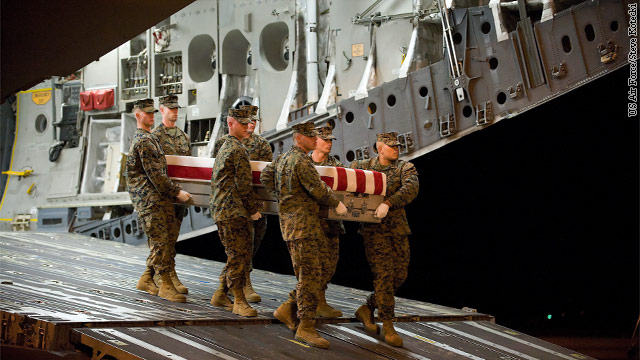 And Panetta insisted that Donley would deliver, even though he's at the top of the Air Force chain of command. "I trust Mike Donley. I think he tried ... to deal with this matter, to go after the issues involved here, to correct them, and to do whatever was necessary to deal with it. And I trust that he'll try to do the same," Panetta said. "And when I tell him to take a look and make sure that appropriate disciplinary action was taken here, I trust that he'll do that."

Panetta also expressed concerns about possible reprisals against Dover Air Force Base mortuary employees who spread the alarm. "This is a serious issue. And as someone who voted for the whistle-blower legislation, I've directed Secretary Donley to report back to me," he said.

Donley released a statement after the Panetta news conference pledging "an exceedingly thorough" review of whether proper disciplinary action had been taken. "The lapses in our standards at Dover, which we sincerely regret, are our responsibility to fix," Donley's statement said. "I take very seriously Secretary Panetta's charge to ensure that appropriate disciplinary action was taken in regards to the Dover mortuary."

And Panetta, who said he had been told of the mortuary problems shortly after he arrived at the Pentagon in July, did not seem fully briefed about criticism that the Air Force only recently had told families about the problems. "My impression was that the families were alerted to that earlier," Panetta said as a questioner said families were only told last weekend. "Well, let me check that out, because the families should have been alerted earlier."

This was Panetta's first opportunity to comment on the revelations of mismanagement and inadequate accountability at the mortuary, first reported this week by The Washington Post, including missing body parts and, in one case, the sawing off of an arm so a body would fit in a casket. On Wednesday, the Air Force said that before 2008, some body fragments and parts not identified in time to be included with bodies returned to families for burial were burned and disposed of in a Virginia landfill. After 2008, that procedure was changed, and those body parts are now cremated and buried at sea.

Some families are outraged. "It is devastating, it is saddening, and it is shocking for our families to hear what happened," Bonnie Carroll of Tragedy Assistance Program for Survivors told CNN.

Panetta promised to keep working on the problem. "None of us will be satisfied until we have proven to the families of our fallen heroes that we have taken every step possible to protect the honor and dignity that their loved ones richly deserve," he said.

Gen. Martin Dempsey, chairman of the Joint Chiefs of Staff, sat beside the defense secretary, with Panetta joking at the start that Dempsey should get all the tough questions.

Both men talked about their concerns about looming budget cuts, with Panetta, a former congressman, taking aim at Capitol Hill. There's growing concern that a failure to reach a budget compromise next week will trigger automatic across-the-board cuts.

"If this nation has brave young men and women who are willing to die and put their lives on the line in order to sacrifice for this country, it really shouldn't be too much to ask our leaders to sacrifice just a little to provide the leadership essential to solving the problems facing this country," Panetta said in his opening statement.

He painted a stark picture of a military cut too deeply - one with a shell but no core. "It's a ship without sailors. It's a brigade without bullets. It's an air wing without enough trained pilots. It's a paper tiger. An army of barracks, buildings and bombs without enough trained soldiers able to accomplish the mission," Panetta said. "It's a force that suffers low morale, poor readiness, and is unable to keep up with potential adversaries. In effect, it invites aggression."

And he would not be drawn into giving details of his own thoughts about possible military action, by either the United States or Israel, to disrupt Iran's nuclear program, just days after a new and ominous International Atomic Energy Agency report.

"You've got to be careful of unintended consequences here, and those consequences could involve not only not really deterring Iran from what they ... want to do, but more importantly, it could have a serious impact in the region, and it could have a serious impact on U.S. forces in the region," Panetta said. "And I think all of those things, you know, need to be carefully considered."