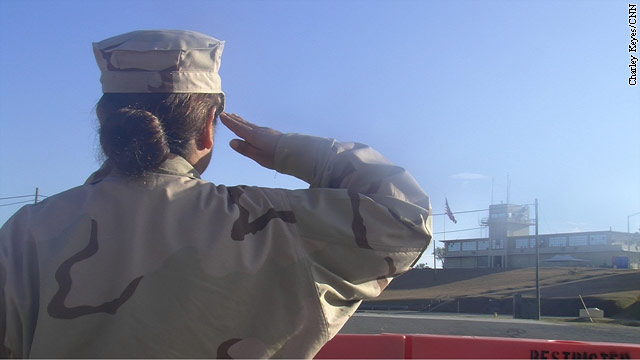 The United States claims he is the brains behind the 2000 bombing of the U.S.S. Cole, which killed 17 U.S. Navy sailors, wounded dozens more and left the warship crippled in the harbor of Aden, Yemen.

The officer in charge of the ship at the time, Commander Kirk Lippold, U.S. Navy (Ret.), says this court appearance is long overdue. “The crew and families have been patient for 11 years,” Lippold told CNN Monday. “It is time for justice to be served.”

The arraignment Wednesday morning is expected to last only an hour or so, with al-Nashiri’s formal military trial still months away. But this potentially could be the first death penalty case in the military commission system if he is found guilty.

And the allegations of water boarding and other torture will turn the international spotlight back to Guantanamo and to how the U.S. deals with its most notorious suspects.

The case is seen as a test run for the future trials of Guantanamo’s most notorious detainees, those accused of planning the 9/11 terror attacks.

Al Nashiri’s military and civilian defense lawyers have said the torture – including repeated water boarding, intimidations by power drills and threats to his family - make a fair trial impossible.

"By torturing Mr. al-Nashiri and subjecting him to cruel, inhumane and degrading treatment, the United States has forfeited its right to try him and certainly to kill him," a defense brief said. "Through the infliction of physical and psychological abuse, the government has essentially already killed the man it seized almost 10 years ago."

And just in recent weeks defense and prosecution lawyers have been sparring, with motions and counter motions, over whether al-Nashiri would be released even if he is acquitted - and whether that should be disclosed to the military officers who will service as jurors in his trial.

“Under the circumstances of this case, where it has been publically acknowledged that Mr. al Nashiri was tortured by the U.S. government, a trial without any real possibility of reprieve is yet another form of torture,” his lawyers said in a motion last month.

The colonel acting as judge in the case has not ruled on that, but the prosecution has argued that release of al-Nashiri goes beyond the authority of the Military Commission.

The suspect faces additional charges related to an attempted attack on the USS The Sullivans in Yemen in January 2000 and an attack on a French tanker in 2002 that resulted in the death of one crew member. The two attacks on U.S. Navy vessels predate the federal Authorization for Use of Military Force (AUMF) against terrorists passed by Congress in the days after the 9/11 attacks.

Some 30 journalists have already been flown to Guantanamo by the military to observe the trial, either in the courtroom or via a television feed to a offices set up for reporters in a nearby abandoned hanger. And for the first time journalists– another 20 or so– will be able to watch the proceedings from the United States, from an auditorium at Fort Meade between Washington, D.C. and Baltimore. Fort Meade is headquarters to the super-secret intelligence organization, the National Security Agency.

And survivors of the USS Cole attack and families of the victims will be provided a closed circuit feed in Norfolk, Virginia. No photographs or recordings are allowed either in Guantanamo or in the remote locations in the United States. All the transmissions are controlled by the military and will have a 40-second delay and kill switch should military censors decide that classified information has been divulged and should be protected.

The al-Nashiri defense team has asked the Military Commission to pay four outside experts, to rule on the acquital and release questioin and to give their client privacy in correspondence with his lawyers. “We are hopeful on Wendesay the court will hear and decide various outstanding issues,” Indianapolis lawyer Richard Kammen told CNN. He is a nationally recognized expert on death penalty cases. He admits that it hard to predict outcomes in the military commissions. “This is a the fuirst hearing in essentially what is a made up system,” Kammen said “They are making this up as they go along.”

Also travelling to Guantanamo, in addition to journalists, lawyers, legal support staff, and representaties of the USS Cole families are representatives of public action groups. Among the observers will be Human Rights First’s Melina Milazzo. She like other critics of the military commissions says terrorists like al Nashiri should be tried in federael courts. This is a risky case. Whativer happens it will be attacked and challenged on a variety of grounds,” Milazzo told CNN. “The al-Nashiri case will highlight a lot of what is wrong with the military commission system.”