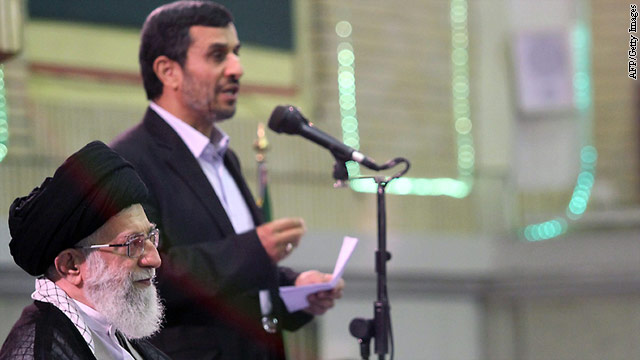 "We see that the government of Iran, the supreme leader, the president, the parliament, is being supplanted, and that Iran is moving toward a military dictatorship."

By "military dictatorship" the Obama administration means the Islamic Revolutionary Guard Corps-Quds Force (IRGC-QF) which experts at the Council on Foreign Relations describe as a "socio-military-political-economic force with influence reaching deep into Iran's power structure" and having control of "strategic industries, commercial services, and black-market enterprises."

Striking at the heart of that "military dictatorship," the Obama administration has aimed most of its recent economic sanctions at senior officers of the Quds Force.

Referring to Iran's growing "military dictatorship," Secretary Clinton often adds a bit of mystery, saying, for example, in an aside to BBC Persia: "It's been a little confusing because we're not quite sure who makes decisions any more inside of Iran, which, I think, is an unfortunate sign and kind of goes along with the ascendancy of greater military power."

Clinton's rhetoric is being noticed by Iran experts, including Karim Sadjadpour of the Carnegie Endowment for International Peace in Washington. "'When she says it's becoming a military dictatorship, she's right," Sadjadpour says.

"In the past they used to refer to Iran as a, quote unquote, clerical regime. That's no longer true."

The ayatollah is more powerful than Iran's President Mahmoud Ahmadinejad, with authority to appoint the heads of influential posts in the military, government, and judiciary. But Sadjadpour says that is misleading. "The Supreme Leader is ... wearing this turban and clerical garb. A more apt sort of clothing for him would be military fatigues."

Ayatollah Khamenei, he says, is "seeking legitimacy in the barracks among the military," since he is perceived by some Iranian clergy as lacking religious education and credentials.

Khamenei was only a mid-level cleric when he succeeded Ayatollah Ruallah Khomeini, the father of the Iranian revolution, when Khomeini died in 1989. Khamenei's bona fides as an Islamic cleric were questioned when he was anointed, and suspicion among some in the clergy continues today.

"Those that are truly pious see the things that are taking place in Iran in the political realm are not reflective of their religious values," Sadjadpour says. "They see this widening income disparity between the haves and the have-nots, and many clerics don't respect Ayatollah Khamenei as a bona fide grand ayatollah."

Khamenei may also be in the midst of engineering a fundamental shift in the Iranian power structure, having recently floated the possibility of abolishing the presidency, and switching to a parliamentary system.

The relationship between the supreme leader and Ahmadinejad has grown cold after Ahmadinejad forced the intelligence minister, a Khamenei protege, to resign earlier this year.

Khamenei promptly re-instated the minister, and the relationship between the two has not recovered according to Iran watchers.

Leave a Reply to Greedy Banker