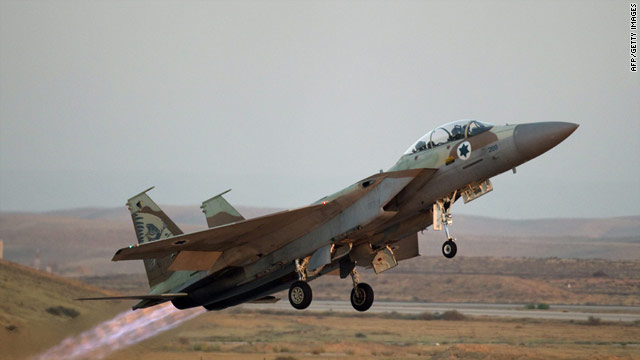 Both the U.S. Central Command, which watches developments in Iran, and the U.S. European Command, which watches developments in Israel, are "increasingly vigilant" in watching potential military movement in both countries.  U.S. satellites are a crucial method of gathering intelligence in both arenas, though the official did not specify that was the method being used.

Separately, another senior U.S. military official is now calling Iran the largest threat to the United States in the Middle East.  Concerns about the threat to American interests from Iran has grown for several reasons, according to military officials.  In addition to the country's nuclear ambitions, recent allegations have come to light about an Iranian assassination plot in Washington, Iranian shipment of weapons into Iraq, and continued Iranian support for the militant group Hezbollah.

The concerns over a possible Israeli strike come as the International Atomic Energy Agency is set to release a report next week detailing Iran's progress on its nuclear weapons development program.  A number of Israeli newspapers in recent days have speculated that the Israeli government could respond with attacks.

The military official told CNN that the United States is watching any Israeli military movements closely as well as those inside Iran.  In the past, the U.S. officials felt they had assurances from Israel that it would give warning to the United States of any attack.

"Now that doesn't seem so ironclad," the official said.

The American assessment is that an Israeli strike could likely include both manned aircraft and use of Israeli Jericho ballistic missiles. Manned aircraft are particularly risky because Israeli pilots would have to cross into third-country airspace, and likely engage in mid-air refueling that could be detected by radars in the region.  In addition, Iranian air defenses are "top notch," according to the official, and pose a threat to both manned aircraft and missiles.  Drones do not have the range to attack Iranian targets and do not carry enough firepower to destroy Iran's underground weapons facilities.

The official underscored long-standing U.S. military concerns about the risk of hostilities to American troops in the region, both those still in Iraq and U.S. naval forces and ground forces throughout the Persian Gulf.  The official also strongly emphasized the United States has no current intention of striking Iran.