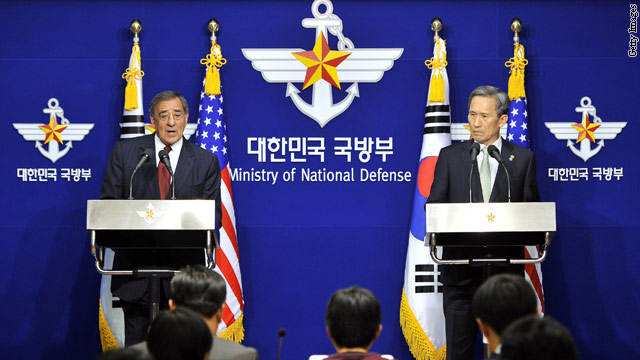 South Korea's defense minister said Friday he expects more provocations from North Korea in 2012, during a session with his American counterpart.

The regime is planning a nationwide, year-long celebration in 2012 to show North Korea is "strong and prosperous" and also to honor of the 100th anniversary of the birth of Kim Il Song, the founder of the communist nation. The current regime is run by his son Kim Jong Il.

That event, along with the ongoing transition from Kim Jong Il to his son Kim Jong Un, is why the South Korean defense minister is worried about more problems from the North in the new year.

A senior U.S. defense official said Panetta is "concerned that threats from North Korea will be elevated next year."

Friday's news conference was the final event of Panetta's week-long tour of Asia that also took him to Indonesia and Japan.

While he promised the U.S. military will remain committed to all three countries and the Asian region in general, in South Korea he spelled out specific steps of how the United States would prove its commitment.

In a joint communique, released Friday, Panetta and Kim said "they decided to increase the combined watch activities on the North Korean situation."

"Secretary Panetta and I have assessed that the bilateral response measures since North Korea's sinking of the Cheonan and artillery shelling of Yeongpan Island have successfully deterred further provocations by North Korea," Kim said.

Panetta said the greatest threat from North Korea is weapons of mass destruction.

"North Korea continues to defy the international community as it enhances its nuclear weapons, its ballistic missile programs and continues to engage in dangerous and destabilizing proliferation activities."

The developments come on the heels of rare meetings this week between North Korea and the United States in Geneva on the regime's nuclear program. He expressed skepticism on Thursday about the likelihood of success from those meetings.

Friday he laid out what Washington expects of the North Koreans.

Even as the nuclear issue continues to simmer, a new threat is emerging - cyber security.

"This is a whole new arena of threats that we have to confront," Panetta said. "It's the weapon of the future in the battlefield of the future and for that reason we want to take steps to make sure were dealing with that threat."

Panetta left for the United States after his session in Seoul where, on Tuesday, the defense official confirmed, he'll meet with House members to discuss security in Asia as well as the rest of the world including Iraq, Libya and even Uganda.