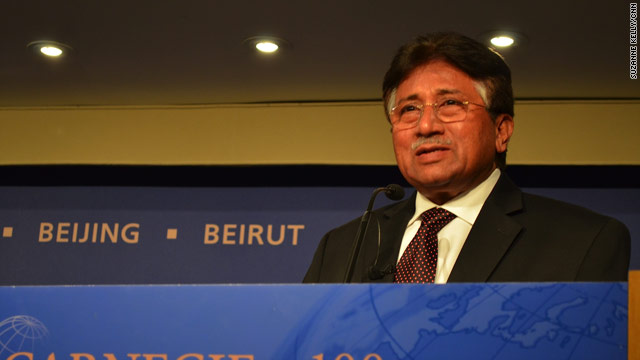 Musharraf says it "can't be" that ISI supports Haqqani terrorists

Former Pakistani President Pervez Musharraf is defending his country's Inter-Services Intelligence Agency against recent accusations by American officials that the agency is working with elements of the Haqqani network, which has targeted Americans in terrorist attacks in Afghanistan.

Musharraf delivered his remarks Wednesday at the Carnegie Endowment for International Peace in Washington, where just weeks earlier, U.S. Admiral Mike Mullen - since retired as the chairman of the Joint Chiefs of Staff - reiterated his belief that the Pakistani spy agency was directly linked to the terrorist organization. Mullen said the ISI played a direct role in supporting Haqqani members in a recent attack on the U.S. Embassy in Kabul.

Musharraf said the agency is "certainly" not pro-Taliban or pro-al Qaeda.

"Why can't it be? Because Pakistan's army has suffered over 3,000 dead; because the same ISI, the much-maligned ISI, has suffered about 350 operatives dead, killed through suicide bombings. By whom? By Taliban, by al Qaeda, the same enemy," he told the audience.

Mullen testified before the Senate Armed Services Committee just ahead of his retirement on how terror groups work from Pakistani territory.

"The fact remains that the Quetta Shura (Taliban) and the Haqqani network operate from Pakistan with impunity," Mullen said. "Extremist organizations serving as proxies of the government of Pakistan are attacking Afghan troops and civilians as well as U.S. soldiers."
Musharraf disagreed.

"We must understand, there is a problem at the tactical, at the modality, at the handling of situation," he said Wednesday.

"There may be a misunderstanding, there may be a difference of opinion, but anyone who tries to convert this tactical mishandling and difference of opinion to reflect or to cast aspersion that ISI and army, at the top level, by design, are facilitating, abetting, encouraging, arming maybe the Haqqani group to go across and kill United States soldiers and bomb U.S. Embassy, I think is diverged from reality, ladies and gentlemen."

Musharraf was also asked Wednesday about intelligence that indicated al Qaeda leader Osama bin Laden was living in a compound in Abbottabad, Pakistan, during the time Musharraf was president, suggesting there may have been some complicity in hiding bin Laden. A major Pakistani military installation was located not far from the terrorist leader's compound.

"I am 500% sure that I did not know, whether anyone believes it or not," said Musharraf. "So, therefore, I am clear that there was no complicity, and I am also clear that the army and ISI could not have hidden this from me because I am from them and they are from me."

U.S.-Pakistani relations hit an all-time low, according to many analysts, after the U.S. raid on the bin Laden compound that killed the al Qaeda leader.

Musharraf, who plans to return to Pakistan to run in upcoming elections, said relations between the two countries are at their lowest point ever.