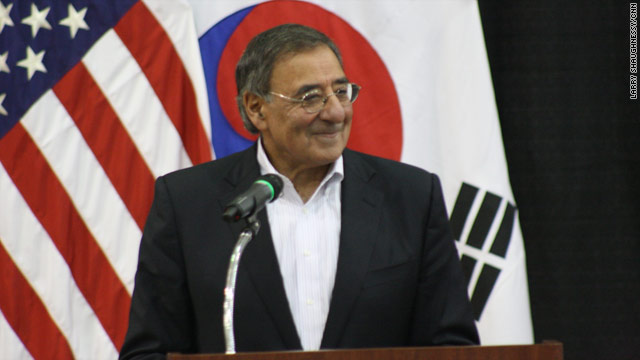 The closer U.S. Secretary of Defense Leon Panetta gets to North Korea, the harsher his tone about the communist regime becomes.
Wednesday, even before he arrived in Seoul for three days of meetings with military leaders, he wrote an op-ed piece for one of South Korea's largest daily newspapers calling North Korea a "serious threat."

"Pyongyang has demonstrated its willingness to conduct provocations that target innocent lives. The North continues to defy the international community as it enhances its nuclear weapons and missile capabilities," Panetta wrote in the opinion piece published in Chosun Ilbo.

Recalling the start of the Korean War when he was a child, Panetta wrote, "Thanks to the heroism of the U.S. and Korean forces, however, the North's invasion was repelled." He neglected to mention smaller contributions by 15 other members of the United Nations, including Great Britain, Canada and Turkey, and ignored Communist China's role in preventing the U.N. forces from overrunning the North completely, leading to the current division of the peninsula.

The secretary's streamlining of history aside, he told 300 U.S. and Korean troops gathered at the Yongsan Barracks in Seoul, the headquarters of the U.S. military in Korea, that because of the war 60 years ago, "we have a South Korea that is a nation that has grown strong and independent, and really represents the kind of nation that will be an important ally to the United States in the Pacific region."

He went even further in the op-ed, writing, "working together, our militaries will continue to deter North Korean aggression, and stand prepared to defeat the North should it ever force war upon us."

While most of Panetta's speech focused on larger strategic issues, it wasn't until he talked about money to the troops that the otherwise polite but quiet audience responded.

Speaking about the budget cut negotiations under way in Washington, he said, "We promised you certain benefits for you and your families and we are not going to pull back on that promise."  The troops responded with the first spontaneous applause he's heard on this weeklong trip to Asia, during which he's met with hundreds of troops.

He had similar words about retirement, saying, "We promised you certain benefits and we're going to stick to it."

The town-hall-style event with the troops ended with a question-and-answer period during which all the troops' questions revolved around their pay and benefits or their chances of getting jobs in the civilian world once their military careers end.

To that question, Panetta replied, "One thing, dammit, that America can do is help young men and women who have served."

Earlier Wednesday, Panetta wrapped up his stop in Japan with a visit to the USS Blue Ridge, the command-and-control ship that oversaw the U.S.

"It's remarkable, 22 ships, 19,000 personnel all involved in trying to help your fellow human beings," he said.

Operation Tomodachi was the U.S. military's name for the massive effort to respond after the magnitude-9.0 earthquake triggered a tsunami on the east coast of Japan. That tsunami badly damaged a nuclear power plant, which began leaking dangerous levels of radiation.

In addition to the Navy, thousands military service members and Department of Defense civilian employees worked on the relief as well.

Within hours of the quake, the Blue Ridge, which was on a visit to Singapore, loaded up with relief supplies and steamed back toward its home port outside Tokyo.  Many of the ship's crew had no idea at the time if their families back at the port were all right, but they kept focused on their new mission.

Panetta, who hadn't yet taken over at the Pentagon, praised the crew for it's sacrifice.

"In the end, the greatest service we do is when we are able to reach out and help our fellow human beings in need," he told sailors on the Blue Ridge.

"And the work that was done here in that disaster, working with the Japanese Self Defense Forces and being able to respond to the drastic needs that people had as a result of that terrible earthquake, It's a great compliment to all of you," Panetta said.

He said their actions will have a long-term payoff for the United States. "I can't tell you how important it was to the alliance between the U.S. and Japan," he said.

And even as Panetta was saying this, sailors from the USS Mustion were in Thailand helping that country deal with the worst flooding in half a century.  They've been working in a warehouse distributing relief supplies and visiting an orphanage to talk with the children.  And the crew of about 300 took up a collection among themselves and will donate the money to the people of Thailand.

Panetta is visiting the Pacific region "to reinforce the U.S. commitment in Asia," according to the U.S. military.