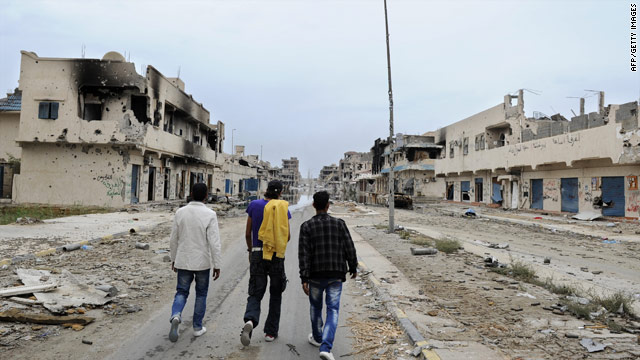 Could al Qaeda fill a power vacuum in Libya?

As Libya's National Transition Council begins its monumental task of setting up a unified government among the country's numerous disparate groups, many experts worry that if there is a power vacuum, al Qaeda could eventually gain a foothold.

Although extremists haven't played a major role in Libya's liberation, a U.S. official who was not authorized to speak for attribution said, "It remains to be seen how much influence they will have in the new Libya, but some will undoubtedly try to make their presence felt."

Since the beginning of Libya's liberation movement last spring, U.S. officials have said there were only a small number of extremists among the rebels. As one official put it, there was a "sprinkling of extremists to perhaps include al Qaeda" among the opposition forces.

In testimony before Congress earlier this year, NATO Supreme Commander Admiral James Stavridis said of Libya's rebel force, "we have seen flickers in the intelligence of potential al Qaeda".

Two of the key military commanders of the rebels, Abdul Hakim Belhadj and Abdel Hakim al-Hasidi, had been members of the Libyan Islamic Fighting Group (LIFG) which was formed in the 1990's in opposition to the regime of Moammar Gadhafi. LIFG favored an Islamic state and also had links to al Qaeda.

But the LIFG formally ended its campaign to overthrow the Libyan regime two years ago and repudiated al Qaeda.

The U.S. official said the United States is keeping a close eye on extremists within the opposition. "It seems from the their statements and support for establishing a democracy in Libya that this faction of LIFG is not supporting al Qaeda now. Time will tell and we're all watching," said the official.

John McLaughlin, the former deputy director of the CIA , said it's unclear what the motives of the former LIFG members might be. "Until we see how they behave in a new government, you have to be suspicious of their intentions," said McLaughlin.

Fred Burton, a terrorism analyst for Stratfor, the international intelligence firm, cautioned that there is "not a lot of visibility into these individuals to know their mind set. This is where we have this chaotic period of time to see how things will shake out."

McLaughlin is not as concerned about al Qaeda interference in Libya in the near term as he is down the road. "The worry about al Qaeda is not in stage one, but stage two," said McLaughlin. He pointed out the initial protests were not about Libyan leader Gadhafi per se, but were targeted towards sub standard living conditions and lack of jobs. The situation turned on Gadhafi when he brutally cracked down on the protesters. McLaughlin said it's up to the new leadership, whom ever it may be, to improve living conditions among the populace. "After a year or so, if not enough progress is made, discontent could set in and that is when al Qaeda could exploit it."

Noman Benotman, a former commander in the LIFG and one time ally of Osama Bin Laden, told CNN several months ago that "if there is a power vacuum in Libya, there will be an open market for al Qaeda." Benotman currently works for the Quilliam Foundation, a counter terrorism think tank in London.

A recent Stratfor analysis also said an unstable Libya could become a hub of jihadist activity.

But in the near term, there is another issue that worries Burton even more - the proliferation of weapons, in particular, surface to air missiles which are capable of taking down planes. "Does anybody have a good handle on the location of that kind of military grade armament inside the country?" the former special agent with the State Department asked. Burton said he is "very fearful" that a SAM missile could get into the hands of al Qaeda. "What's to stop an enterprising person to sell a nice surface-to-air missile for $250,000 out the back door to anybody?" Burton is not convinced there are any systems in place in Libya right now to stop that from happening.