By Christabelle Fombu and Jack Maddox

An explosion at a bus station in downtown Nairobi, Kenya, killed at least one person and injured eight Monday, according to the Kenyan police and Red Cross.

Charles Owino, a deputy police spokesman, confirmed the explosion and said he was awaiting more details.

The blast follows a separate explosion that police said hurt 12 people earlier Monday at a nightclub in Nairobi.

"We have not yet linked attacks to anybody as we are still investigating," Owino said.

The explosions came a day after the U.S. Embassy in Kenya warned it had credible information of an imminent terror attack. The embassy did not offer details on who might carry out such an attack but said it had limited official U.S. government visits and urged citizens to consider deferring travel to Kenya.

The attack was likely to target places that foreigners congregate in Kenya, including malls and night clubs, the embassy said.

Kenya has been on edge since it sent troops across the border into Somalia to pursue militant with Al-Shabaab, an Islamist group that the United States and other countries view as a terrorist organization. Kenya sent in troops after the recent abductions of tourists and aid workers. It blames the abductions on Al-Shabaab, which has denied involvement.

Al-Shabaab has threatened to attack Kenya if it did not withdraw its forces from Somalia.

Owino, the police spokesman, said the nightclub attack "could be Al-Shabaab or an individual. We are still investigating." 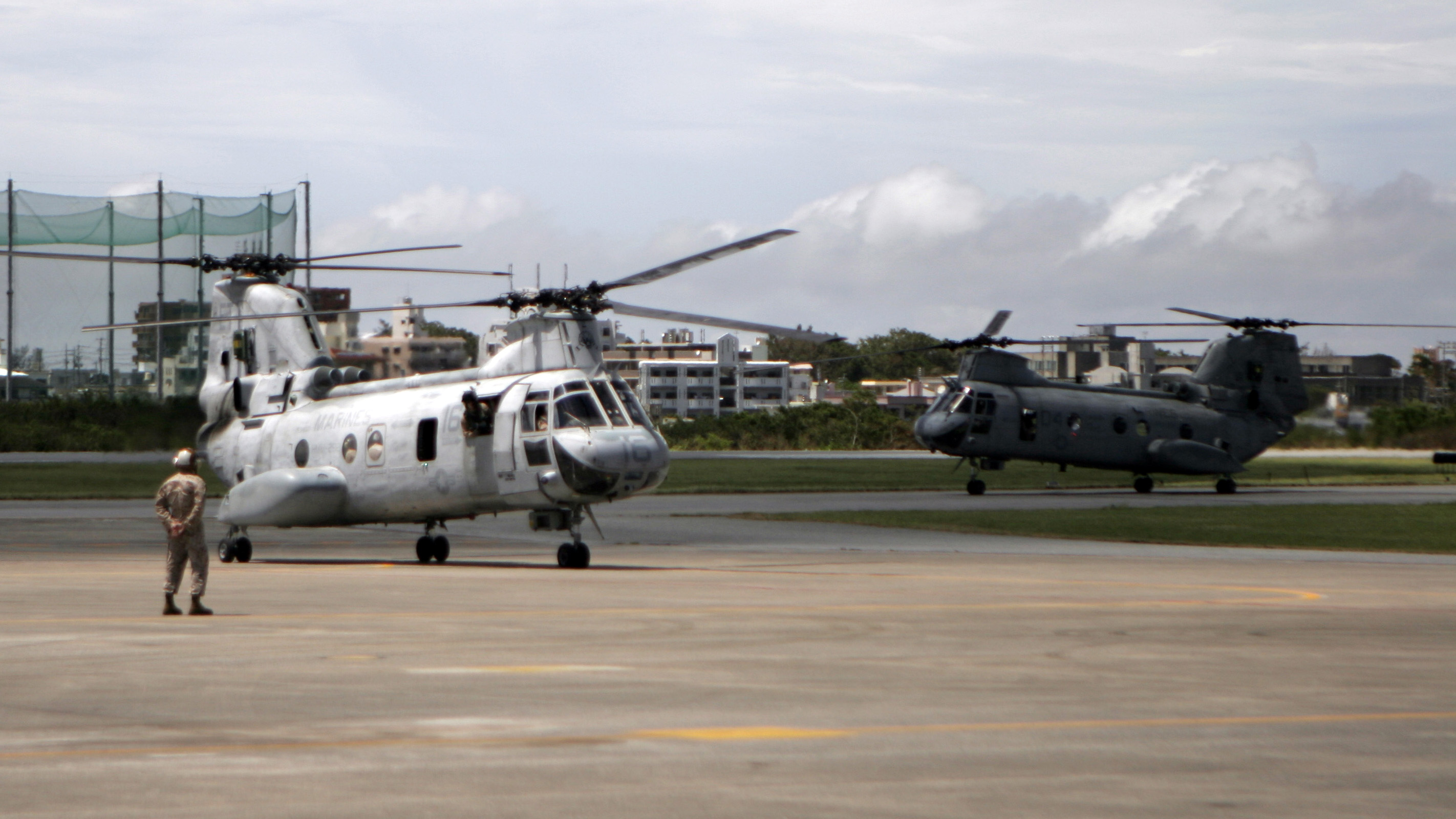 A small base but giant issue in U.S.-Japan relations

Futenma Air Station on Okinawa is just one of dozens of American military installations in Japan. It is not the biggest and it is not home to the most American troops, but its status has become a bellwether issue between the two allies.

It almost certainly will come up when U.S. Secretary of Defense Leon Panetta meets with the Japan's prime minister, defense minister and foreign minister on Tuesday.  Ahead of his arrival in Japan as part of his weeklong trip to Asia, the issue of one the Marine Corps base on Okinawa was at the forefront.

"Realigning the U.S. military footprint in Japan will make our alliance more effective while reducing the impact of our presence on local populations," Panetta wrote in an op-ed published Monday Morning in a Yomiuri newspaper, Japan's largest daily.  "Moving forward with the relocation of Marine Corps Air Station Futenma to Camp Schwab is a core part of this effort."

Futenma first became an American military base in the waning days of World War Two after the United States invaded Okinawa.  At the time, the area on Okinawa's southwest coast was sparsely populated.  But in recent years, the city of Ginowan has grown up around the base, leaving the runways and base facilities surrounded by densely packed homes and businesses. END_OF_DOCUMENT_TOKEN_TO_BE_REPLACED

'Who lost Iraq' is the wrong question

by Christopher Hill, special to CNN

Editor's note: Christopher Hill, dean of the Josef Korbel School of International Studies at the University of Denver, served as U.S. ambassador to Iraq from 2009-10.

In 1949, the communist takeover of China was the beginning of another campaign in the U.S.: Who lost China? It went on for years.

The failure to conclude an agreement to maintain U.S. troops in Iraq is already becoming grist for critics to blame the administration for somehow "losing Iraq" and failing to ... do what? Convince the Iraqis they need our troops against Iranian aggression? 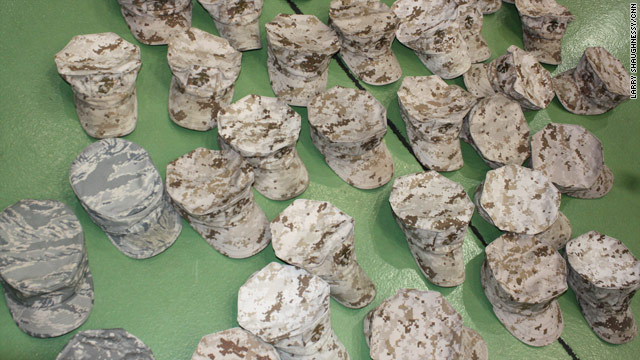 Hats off to SecDef

By Pentagon Producer Larry Shaughnessy at Yokota Air Base, Japan

About three dozen US military hats lay on the floor of a hanger at Yokota Air Base. The brownish hats are officially called Marine utility covers. The greyish hats are Air Force BDU Caps.

The troops who own the covers and caps were nearby in the hanger listening to an address by Secretary of Defense Leon Panetta (aka SecDef for those into shorthand) .  Because they were inside, military regulations dictate that they remove any head coverings, hence the herd of hats on the floor. 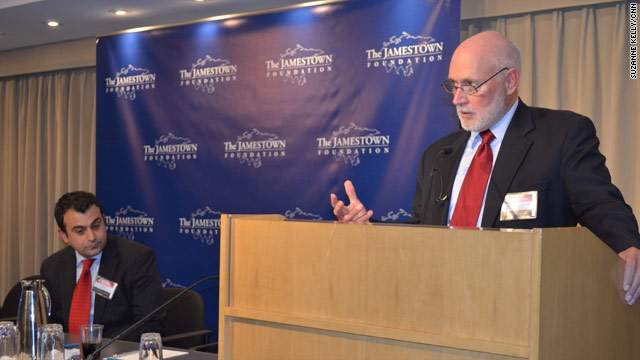 (CNN) – As President Obama pulls troops out of Iraq, analysts, including a former U.S. ambassador, are urging the United States to accept a greater risk model in Yemen in its pursuit of Al Qaeda in the Arabian Peninsula (AQAP).

The U.S. has employed a more aggressive strategy in both Iraq and Afghanistan in its pursuit of al Qaeda, and despite some high-profile killings of AQAP members in Yemen, some analysts argue that drones alone are not enough.

Anwar al-Awlaki and Samir Khan were killed September 30 in an American-directed strike, essentially crippling AQAP’s unique ability to appeal to potential recruits using the English language. Few believe that the deaths delivered a devastating blow to the organization overall. END_OF_DOCUMENT_TOKEN_TO_BE_REPLACED 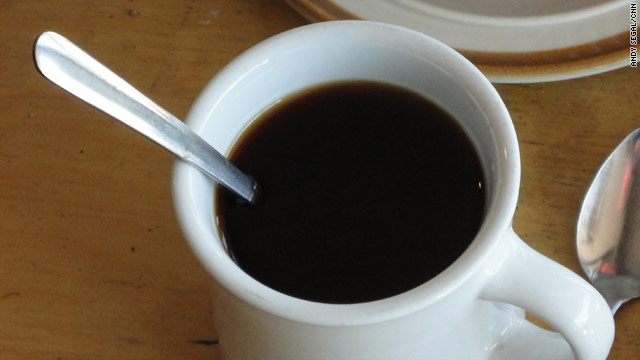 The U.S. and North Korean delegations are meeting in Geneva, Switzerland for the next two days to discuss a return to six-party talks. So far, the publicly available information has been relatively scarce, save for a good rundown of when the respective parties have been grabbing refreshments.

Here is the latest statement from the U.S. Special Envoy to the Six-Party talks on progress and repast: END_OF_DOCUMENT_TOKEN_TO_BE_REPLACED 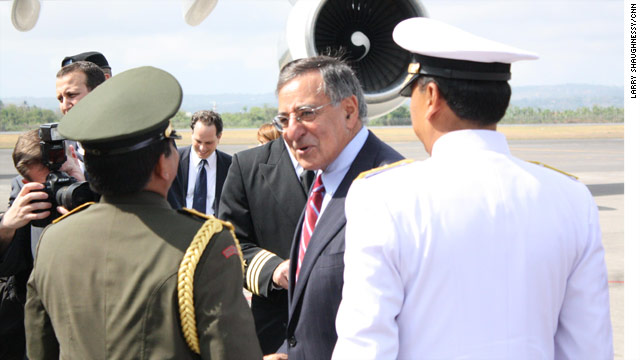 Just the day before the op-ed was published, Panetta told reporters, "I would commend them (China) for the way that they've handled the news of that sale to Taiwan." END_OF_DOCUMENT_TOKEN_TO_BE_REPLACED

While the world's attention has been focused on events in north Africa, events thousands of miles away on the coastline of the Indian Ocean could have just as great an impact on the continent's security.

Kenyan troops have now advanced deep into Somalia, along rutted tracks and pot-holed roads leading north from the border toward the port of Kismayo, a stronghold of al Shabaab, the Islamist militant group affiliated to al Qaeda.

The Kenyans sense an opportunity to deliver a knock-out blow against Shabaab, which has already been driven from most of the capital, Mogadishu.

The operation was launched a week ago followed a string of kidnappings of Westerners in northern Kenya, which Kenyan authorities blame on al Shabaab.

Though held up by heavy rains, the Kenyan military claimed Saturday that Kenyan forces had advanced beyond Oddo, a town ten miles up from the border, and had met little resistance so far. Kismayo is a further 90 miles north; Kenyan military sources say they plan to occupy the town before Christmas.

The ultimate goal, they said, was to work with Somalia’s Transitional Federal Government (TFG) for no less than the complete elimination of Al Shabaab from all of Somalia. END_OF_DOCUMENT_TOKEN_TO_BE_REPLACED

US pulls envoy from Syria over safety concerns

The United States has temporarily pulled its ambassador out of Syria  as a "result of credible threats against his personal safety," State Department spokesman Mark Toner said Monday, accusing Syria of "incitement" against Ambassador Robert Ford.

"At this point, we can't say when he will return to Syria," Toner said in a statement.

Ford was attacked by a pro-government "armed mob" last month, a United States official told CNN at the time. The official is not authorized to speak to the media and asked not to be named.

While there have been long-standing concerns about Ford's safety and threats against him, the decision was made to pull him temporarily after government-sponsored Syrian media began running false reports blaming Ford for death squads in Syria similar to the ones in Iraq, senior State Department officials told CNN. END_OF_DOCUMENT_TOKEN_TO_BE_REPLACED