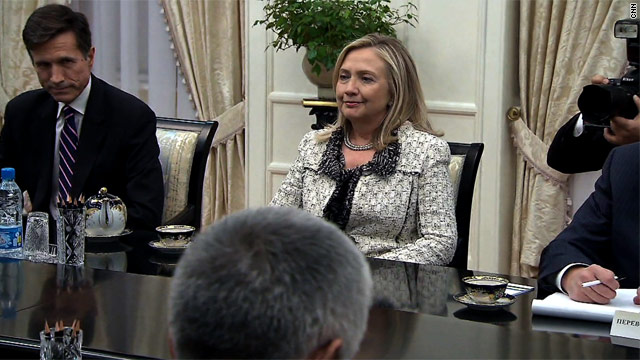 Then Clinton leans in to give the young audience, many of whom were born after the Soviet Union collapsed, a history lesson.

When Kennedy was president, she says, he tried to work with the Soviet Union despite very strong disagreements about policy "because we believe it is important to try to continue to exercise whatever influence we can on behalf of people who themselves may not have a voice.

"There are many countries that have taken severe actions against the rights of their citizens in history - this is nothing new - but today, everybody knows about it. There is no way to keep it secret. It will be on the Internet. When President Assad in Syria sends his security forces to kill peaceful demonstrators, they can't hide that anymore."

Here in Central Asia, a region still swirling in transition 20 years after the end of the Soviet Union, human rights are being re-defined daily by governments and by their people. The Soviet constitution extolled its citizens' rights while, in many cases, subverting them. The old slogans today ring hollow.

In post-Soviet Tajikistan, for example, a predominately Muslim country, the government says it is concerned about the threat from radical Islam. It now has a "parenting" law that restricts the ability of young people under the age of 18 to attend mosques. There also is a campaign against women wearing the hijab and men growing beards.

"What we said to our friends in the (Tajik) government is that these kinds of actions, first of all, undercut the ability of people to worship - their freedom to worship. But they also risk driving a lot of people underground and basically can be destabilizing," the official said.

At the town hall, Clinton takes up the theme: "The problem for many societies in transition who have a predominant religion in their society, which they respect and cherish because it is their national tradition, a particular religious orientation, is how to make sure you do not impose religion but you create space so that religion can operate.

"I think this is one of the biggest challenges facing many democracies in transition and many Muslim-majority countries," she says, "because there's a new opportunity to try to define what one means by democracy, civil society, and human rights, including the right to have your own religion.

At almost every stop on her week-long trip to Malta, Oman, Libya, Afghanistan, Pakistan, Tajikistan and Uzbekistan, Clinton brings up the issue of human rights for women. The town hall in Dushanbe filled with young women in business suits as well as some in traditional attire, is no exception. Speaking about Afghanistan, Clinton says: "There cannot be a peace that sacrifices the rights of women. You will not have a sustainable peace and it would be wrong."

In Tajikistan, the State Department official who spoke on background because of diplomatic sensitivities, says there has been "backsliding" on religious freedom and in the way the government deals with the media. Several reporters have been arrested for stories on corruption and on the arrest of a religious figure, the official says.

In Uzbekistan, the key human rights issues are human trafficking and religious freedom, but the official says the United States does "see more willingness on the part of the Uzbeks to work with us on these big issues."

In her meeting in Tashkent with the Uzbek president, Clinton discussed human rights and "noted the need for progress," the State Department official said.

President Karimov, who has been strongly criticized by some human rights groups, gave what some might consider a surprising reply.

"President Karimov commented that he wants to make progress on liberalization and democratization," the U.S. official told reporters, "and he said that he wants to leave a legacy for both his kids and his grandchildren."

Could Central Asia see its own "Arab Spring" like the uprising that swept through North Africa and the Middle East this year, removing from office long-time dictators? Central Asia, too, has some leaders who have been in power for years. It also has many of the factors that fueled the Arab Spring, including poverty and lack of opportunity for young people.

"I think there has been a demonstration effect around the world of the Arab Spring," the State Department official says.

Still, each nation in Central Asia is different, just as each "Arab Spring" country is different.

Many of Tajikistan's "angry young men" are working in Russia and Kazakhstan because they cannot find jobs at home. They send home crucial remittances to their families. But unemployment is not as bad as in Egypt and Tunisia. Also, social media in Tajikistan is much more controlled. It is more difficult for young people to organize, the official points out.

"So I don't see that there's going to be any imminent sort of Arab Spring-like movements here," the official says. "Nonetheless I think it's important for all of these leaders to pay attention to that and be responsive to the cares and needs of all their people, particularly their young people."

Leave a Reply to SERENADDA