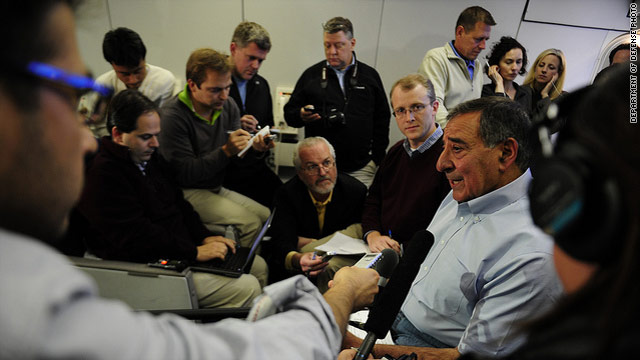 Panetta heads to Asia to meet with allies, keep an eye on China

Leon Panetta, just back from a long trip to engage with America's European allies, climbed back on board his plane Friday for his first trip as secretary of defense to Asia with the same goal in mind.

"It'll be a chance for Secretary Panetta to really share strategic views with his counterparts about the region," according to one of two senior defense officials who briefed reporters about the trip.

The defense secretary's first stop is Bali, Indonesia, before traveling to Tokyo, then Seoul.

But at all the stops, it's possible, if not likely, that China will be chief among the topics of discussion.

The goal of the trip is not to alienate China; the secretary hopes these visits will strengthen U.S. relations in the region, including with China.

"We are not trying to contain China, that is not our policy," the second senior defense official said.

Panetta himself, while en route to Bali, told reporters that "the message on China is that the United States really does want to develop a cooperative relationship with China."

"At the same time, I think China must recognize that in order to have that kind of relationship, that they have to be transparent and they have be working with us to try to recognize international rules," he said.

When asked if China should feel slighted that Panetta is not visiting Beijing while in Asia, a senior official said that the United States and China have a schedule for such visits, and Robert Gates visited before he resigned as secretary of defense.

"It would be odd if the secretary were to be going to China now; it would be out of step with the normal pace of relations. So I wouldn't read anything into that one way or another."

While in Indonesia, Panetta - who visited Asia a number of times as a congressman, President Clinton's chief of staff and as CIA director - will meet with his counterpart, Defense Minister Purnomo Yusgiantoro. They will discuss improving military relations with Indonesia, which the official said have "really grown robustly over the past number of years."

The two nations already have exchanges of officers from training and some military sales agreements.

While in Bali, he'll also have the opportunity to meet with defense ministers from the Association of Southeast Asian Nations to share thoughts about regional issues. ASEAN includes U.S. allies like Indonesia, the Philippines and Thailand, but also includes Myanmar - also known as Burma - which the U.S. has had strained relations with, to say the least.

The officials who briefed reporters about the trip said any number of issues could come up: "This is the ASEANs looking at the key regional powers and wanting to have this kind of a dialogue with each of them."

One issue likely to come up is the realignment of U.S. troops, especially Marines from crowded areas of Okinawa. It's a matter that's been in discussion for more than a decade, but there's no final resolution in sight. "We remain committed to the principles of the realignment road map," the second official said.

The U.S. has for years had an agreement with Japan to move thousands of U.S. Marines off Okinawa, in part because the islands have grown more populated in recent decades. The plan calls for Marines to be moved to a less populated area, but Japanese governments over the years have not carried through with their end of the agreement, and the U.S. is reluctant to move the Marines without full implementation of the agreement.

The second official said the U.S. wanted South Korea to know "that if North Korea, as it has in the past, should choose to undertake a provocation, that we are prepared. Right now, we are essentially exploring the proposition and trying to work to ascertain if the North Koreans are serious."

His final stop will be Seoul, where, as he will in Japan, hold town meetings with U.S. and South Korean troops.

In Korea, a small but serious issue could work its way into Panetta's troop meetings. An American Army veteran who served in South Korea said he saw Agent Orange, the carcinogenic herbicide used in Vietnam, being buried at a base in South Korea. For months, U.S. Army and South Korean investigators have searched for evidence of the Agent Orange and have not confirmed the veteran's claim. The issue has gotten a lot of attention in South Korea.