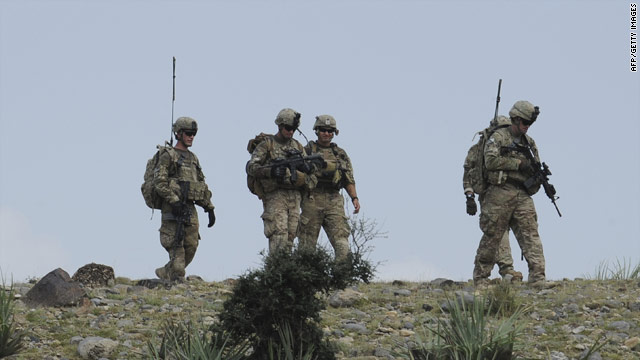 Hillary Clinton unveiled a new objective for Afghanistan that's being dubbed "fight, talk, build," with fight being the major emphasis.

The U.S. secretary of state said Thursday in Kabul, Afghanistan, that all three objectives need to done simultaneously and that the

"Under the circumstances, we must do all three at the same time," Clinton said. "So we want a very clear message to the insurgents on both sides of the border that we are going to fight you, and we are going to seek you in your safe havens, whether you're on the Afghan side or the Pakistani side. They must be dealt with."

As part of that, Clinton said, U.S. and NATO troops are taking the fight to the Haqqanis. A "major military operation" in recent days is aimed at "rounding up and eliminating Haqqani operatives on this side of the border," she said.

"We are taking action to target Haqqani leadership on both sides of the border. We are moving toward a very international effort to squeeze the Haqqanis with the funding and other aspects of the operations. So, I think there is a lot going on that will be more apparent in days and weeks ahead," Clinton said.

Clinton was clear that the focus was now on the Haqqanis' safe havens in Pakistan.

While she and other American officials have been critical of Pakistani support for the Haqqani network, Clinton told CNN's Foreigh Affairs Correspondent Jill Dougherty that Pakistan was helpful in fight al Qaeda, the primary focus until recently for the United States.

"Up until recently, the primary focus of our efforts in Pakistan were the dismantling and defeat of al Qaeda, and the Pakistanis were helpful. They were cooperative and have continued to be as we have been successful in not only removing Osama bin Laden but others that were principal leaders of al Qaeda. So we do think we've severely damaged al Qaeda," Clinton said.

Clinton said now was the time to confront the Pakistani government and push it to act against the Haqqanis.

"In recent months, we've seen the Haqqani network turn from being a fighting force to one that is deliberately targeting American targets, like this embassy that we're sitting in. We cannot tolerate that. And the safe haven in Pakistan from which they launch these attacks has nothing to do with the Taliban coming back into Afghanistan," she said. "It has nothing to do with Pakistan hedging against India or whatever the explanation is. It has to do with this group that has a safe haven in Pakistan targeting Americans. And that changes the calculation for us, and it should change the calculation for the Pakistanis."

As part of the new approach touted in Kabul, Clinton said, the time has come to try to engage the Taliban in talks to stop the fight.

"We want to start talking. We believe that the time has come," Clinton told Dougherty. "We have reversed the momentum of the Taliban. So how do we take advantage of that? It is now time to see whether there is an appetite for any kind of negotiations that would lead to a reconciliation.

"It took time to get us in a position where we could turn with real intensity toward the safe havens in Pakistan. And now it's a question as to how much cooperation Pakistan will provide in going after those safe haven," she said. "But it took some time to get to this point. We are here now, and we intend to push the Pakistanis very hard as to what they are willing and able to do with us in the international community to remove the safe havens and the continuing threats across the border to Afghanistan."

As for building, officials traveling with Clinton said that it is a continuation of the effort to better Afghanistan in terms of trade, investment, infrastructure and education.