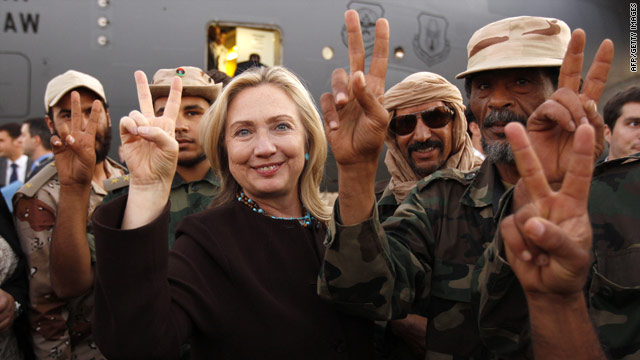 As she walked through the corridors of the Tripoli Medical Center Secretary of State Hillary Clinton saw the stark reality of what Libya needs after nearly eight months of heavy fighting: in the rooms she visited were young men with severe injuries to their legs.

Doctors are fighting to save their limbs but for one patient the battle is over; his leg has been amputated. The physician told Clinton that dozens of men urgently need to be flown outside Libya to other countries that can provide specialized care but red tape is preventing their getting treatment quickly enough to avoid amputation.

A program the Secretary announced in Libya could help relocate some of them to the U.S. That program also will forge partnerships with the private sector to provide spare parts for medical equipment and systems for tracking patient progress.

But the challenge in Libya, politically as well as on a humanitarian level, is enormous. Just before her meeting earlier in the day with the National Transitional Council’s Prime Minister, Mahmoud Jibril, Clinton told him “Now the hard work begins!”

The Secretary of State’s visit to Libya was partly a pat on the back for the bravery Libyans showed during their Revolution, partly a push for the country’s political leadership to make good on its promise for a democratic transition.

“The U.S. stood beside you in your fight for freedom and we will continue to stand with you as you continue this journey, respecting your sovereignty and honoring our friendship,” Clinton said. “This is Libya’s moment, this is Libya’s victory. The future of Libya belongs to you.”

Clinton is the first cabinet-level U.S. official to visit the Libyan capital since 2008 and since opposition forces liberated it from Gadhafi loyalists almost two months ago. As the Secretary’s motorcade streaked down the streets and highways of Tripoli it was surrounded by a motley collection of cars bearing the insignia of the rebels, driven by men in civilian clothing, along with scattered pickup trucks outfitted with machine guns, a common sight in the capital. At several stops there was the distant sound of gunfire, unclear whether it was a small gunfight or celebratory shooting by people marking the opposition’s victory.

Clinton met with the leadership of the National Transitional Council, including its chairman, Mustafa Jalil, and its Prime Minister, Mahmoud Jibril, pledging a new partnership between the United States and Libya

Clinton announced the U.S. will increase the funds available for the destruction of should-fired heat-seeking missiles call MANPADs, bringing the total to $40 million. The weapons can pose a deadly threat to civilian aircraft. Most military planes have technical equipment that protects them from that threat and the secretary flew to Tripoli on a military plane.

The U.S. has given Libya a total of $135 million in humanitarian assistance and non-lethal military aid, according to U.S. officials.

At a town hall at Tripoli University Clinton fielded questions from a friendly crowd of students. Here, and at other stops, the Secretary praised the participation of women in Libya’s revolution, saying they had “earned the right to be part of Libya’s future.”

Clinton arrived as fighting continues in at least two major cities and an elected government is months away. Gadhafi remains at large, posing what a senior State Department official traveling with the Secretary termed a "lethal nuisance." Nevertheless, the official said, it is “exactly the right time to come” to signal to the Libyan people the U.S. wants a normal relationship, after 42 years of Gadhafi’s rule.