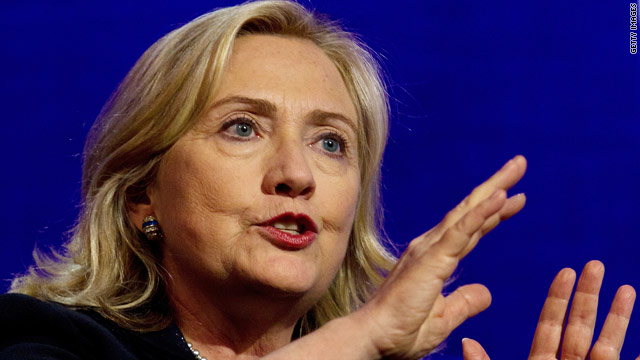 Clinton: U.S. needs to shift from danger to opportunity

Secretary of State Hillary Clinton will make the case Wednesday that U.S. foreign policy needs to shift from confronting danger to finding opportunities.

In a speech to be given in Washington, Clinton will argue that while over the last decade America has focused "by necessity on the places where we faced the greatest danger," it cannot define foreign policy.

"In the decade ahead, we need to focus just as intensely on the places where we have the greatest opportunities. This too must be a hallmark of our leadership," Clinton will say, according to excerpts of her speech released by the State Department.

The speech to the Center for American Progress focuses on America's global leadership. Clinton will emphasize greater reliance on coalitions.
"The test of our leadership going forward will be our ability to mobilize disparate people and nations to work together," Clinton will say. "Building a coalition and sharing the mission are hallmarks of smart and effective leadership."

Clinton argues that coalition building is pragmatic because it is a cost-effective and sustainable.

"By involving more countries in the common effort, it increases international legitimacy and also strengthens the global architecture of cooperation," she will say in the speech.

That said, Clinton is not ruling out unilateral action by the United States where needed.

"Now, there will be times when the United States will and must act boldly and directly, and alone. The operation in Pakistan that resulted in the death of Osama bin Laden is a good example."

Clinton speaks at noon in Washington.