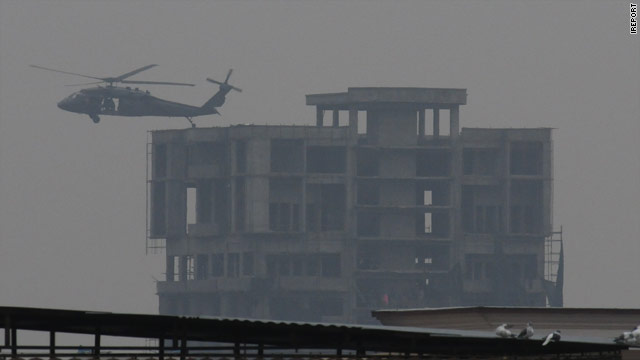 Members of Congress, however, have been pressing for the entire organization to be named. Sen. Carl Levin, D-Michigan, chairman of the Armed Services Committee, said he'd asked for the designation.

"I've repeatedly written to Secretary Clinton to press to have the Haqqani group added to the State Department's list of foreign terrorist organizations to make more tools available to our government agencies to sanction that organization," Levin said at a committee hearing last week. "This step is long overdue."

"I think everyone's just trying to think through what the potential repercussions are and make sure that we keep open our options and our own national security interests," one senior administration official told CNN.

That official said the move could be more symbolic than anything.

"There is a question about how much this would actually do because it freezes Haqqani assets in U.S. banks," the official said. The group does not have a lot of money in U.S. banks, according to another official.

The administration has had high-level discussions in the past about designating the Haqqani network as a foreign terrorist organization. Some in the military felt it was warranted and pushed for the designation, according to two senior U.S. officials.

But the Obama administration had resisted listing the group out of concern that it would drive the Haqqanis away from a possible peace deal. The group, with its links to other Taliban entities, was considered integral to the political reconciliation the U.S. was hoping to move forward, according to two senior U.S. officials.

Matthew Levitt of The Washington Institute told CNN, "To the extent one believes you can reconcile, you would want to not antagonize them in a moment when they are coming in from the cold."

He says, however, that "every indication is that the Haqqani network is getting more extreme and is affiliated with whichever radical element is active at the time." Recent attacks by the group, he says, have shown that "they have not responded to reconciliation."

"Once we fingered the Haqqanis for the deaths of Americans I don't see how we don't designate them but there have been valid reasons why we haven't done it to date," a third U.S. official said.

But the official disputed that this was done in reaction to Adm. Mike Mullen's comments last week. Mullen, the chairman of the U.S. Joint Chiefs of Staff, accused Pakistan's top intelligence agency of supporting the Haqqani network and its attacks against U.S. targets in Afghanistan.

"The decision to list would have been made anyway, I don't think Mullen's statements drove this ... it might have accelerated the decision a little bit. But the real issue is relationship between the U.S. and Pakistan," the official said.

Once a final decision is made, the process takes approximately two to three weeks to enact. When Clinton decides to designate the group, the decision goes to the Treasury and Justice departments to get their sign-off. After that Congress is notified.